In addition to checking two more stadiums off the list, another goal of this brief SoCal trip was met when I got to meet my cousin Frank. He's my fifth cousin, once removed (5C1R), which means our first common ascendants are my fourth great grandparents and his fifth great grandparents. The father of my fourth great grandfather on this line is Johann Carl Wagenhorst, who arrived in the colonies in October 1772. This is the same ascendant as shared by another 5C1R who I met back in February. Are these two 5C1Rs related? Certainly. Siblings? Nope, not these two. They're third cousins.

A 4C2R of theirs will be interested to learn some of the family history we discussed. Further, a third cousin of mine, and coincidentally a 5C1R of theirs who I expect to meet in the coming months, will be as well.
While we joke about the specific relations, there is no denying the effort we've put into our genealogies. We've shared data, discoveries, pictures, resources, and have bonded in the process of expanding the family tree. 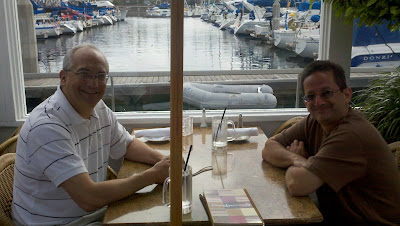