Showing posts from January, 2012
Show all

January 31, 2012
At the start of his career, he was the second best catcher on the Yankees. For a few years after that, he was the second best catcher in New York. But, there is no denying Jorge Posada was a very essential part of the Yankees' success for so many years. That switch hitting bat of his lived in the middle of an always potent Yankee lineup, and created pitching matchup problems for the opponent. Despite some ups and downs with the press as his career slowed down, he always has seemed so worthy of our respect and admiration. Some will argue that he is a Hall of Famer, others will argue the opposite. Maybe he does have too few hits to cement his legacy. Perhaps that double off Pedro in the 2003 playoffs was his grandest hit, and even that was eclipsed by what Boone did to end that series. As he says here, however, he "did come out to play everyday", and for a catcher, that's no small feat.

The Night My Beretta Died 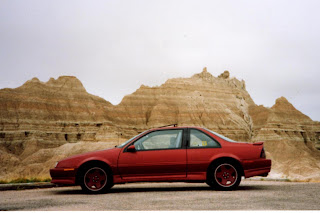 I'm rather surprised to have so few pictures of my first new car, a 1990 Chevy Beretta GTZ. It mostly predates my interest in photography, and the only pictures I have with it were shot with a little Ricoh point and shoot. But still, I have so few of it.

That car got me to football games in the midwest in 1990, to ballgames in Boston and Baltimore in the spring of 1991, and then to a bunch of games in September of 1991, when I spent the middle days between weekend midwest ballpark and stadium visits on a sojourn to South Dakota. Here is my best picture of it, taken in Badlands National Park...


That's better. The day before, she had topped 100 MPH for the second time. It was a great trip in so many ways.

Little did I know that my car would be declared a total loss a few months later.

Without warning, my deep red Beretta GTZ spewed orange–red flames into a rainy grey January evening. I was returning from the DMV of all places, when th…
1 comment
Read more

I'm not superstitious, but...

January 19, 2012
For the past few weeks, I've done a post about the Giants, and they've won the next Sunday. Now, there may be plenty of reasons for Big Blue to lose, but let it go on record that HKHWR is doing his part to keep this nice run going.

Not boastful in either of the first two rounds, I am certainly not going to change my tone here. I will note that I like the way the Giants are playing on all three sides of the ball--offense, defense and special teams. A wise coach from a division rival once said you had to win two out of three to win, and the Giants don't look overmatched in any of them.

For most of the season, I had thought the Giants special teams were average at best. They're certainly not an elite group, but they are playing more competently than they have all season.

I am very happy happy with the way the offense is going. The running and passing games are both solid. The two-back rotation does take a quarter or so to start moving, but they seem to get stronger as the…
Post a Comment
Read more

Can history repeat for Big Blue?

January 11, 2012
When the Giants built that momentum that got them to the playoffs at the end of the 2007 season, their first opponent was the Bucaneers. I remember thinking that the Giants could totally win that game if they played as they did the week before against the undefeated Patriots. And they did.

Their next opponent was the dreaded Cowboys. I remember thinking that game could go either way. The Cowboys looked good going into the playoffs, and I wouldn't have been shocked at all if they won, but I thought Big Blue could do it. And they did.

Then there was that little game against Green Bay. Lambeau Field. The Frozen Tundra. Manning, a QB who had never played in weather like that, and ditto for many on the team, who I thought tipped their hand about the frigid temperatures presenting a problem. I recalled that the Bucs, who had never won a game when the temperature was below 40 at kickoff, had in a recent season knocked off GB up there, but I simply didn't give the Giants a chance. The…
1 comment
Read more

What a difference a year makes

January 03, 2012
A year ago, the Giants finished 10-6 and missed the playoffs. I blasted them (or maybe whined about them) a number of times on this blog. They did plenty of things right, but clearly it wasn't enough, and, when push came to shove, their record appeared to be better than they were.

This year, their record is worse, but they seem like a better team than that one, especially of late. They've been playing without a number of key starters from last year, yet other players have come in and played well or well enough in their absence, and others have simply excelled.

The QB has thrown two fewer TDs this year, but has had a much better season: He's thrown for well over 1.5 miles more compared to what he threw last year and has nine fewer INTs. He also lost one less fumble this year compared to last, and I must throw in the fact that he had one critical fumble recovery this year, extending a drive in the second half of the deciding final game.