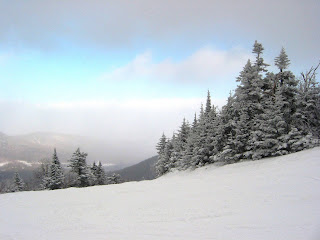 I realize I posted this on Facebook last year, but I can’t think of the February 2005 ski trip mentioned in my previous entry without recalling the following shenanigans with my friends.

On this particular trip, I got to ski four mountains over four or five days. On one of the days, three of us left the others and went up to Jay Peak (pictured here; the photo was not taken with my Seagull 120, but rather a small digital camera that fit in my pocket...). After a nice day on the slopes, we returned to Stowe that afternoon, and were promptly assaulted by all the kids in the group, who bombarded us with a cooler full of snowballs they had made.

That evening we were all cleaned up and waiting for the town shuttle to pick us up and drive us to the restaurant we had chosen for dinner. The group comprised 7 or 8 adults and about 10 kids. Somebody was going to throw the first snowball; however, rather than get into a snowball fight before dinner, someone suggested we take aim at a telephone pole just across the two-lane road. Boastfully, I said that was too easy a target, and suggested we aim for a telephone pole that was a good distance beyond the first one. I grabbed some snow, quickly shaped it into a snowball, and fired. Wouldn't you know, I nailed the more distant pole on my first attempt. The other adults had turned to grab snow and didn't witness my throw, but the kids saw and yelled in approval.

In what turned into a Snuffleupagus sighting, the other adults did what I would have done, and said they didn't see the throw, and didn't believe I could have hit the target with one shot. Even though a blotch of snow bisected that pole where I had hit it, we all had to continue throwing snowballs and try to hit it again. I figured that if I hit it once, I could hit it again. Well, we each took aim, and fired maybe a dozen more snowballs--without gloves of course; real men don't use gloves when making snowballs, no matter how numb our hands get (and you can't make a good snowball with gloves on anyway). Getting tired, and afraid the bus would come without us hitting our mark, we turned our attention to the nearer pole, which was maybe 30 feet away. Needless to say, even that proved to be a challenge. And, our hands weren't getting any warmer.

Mercifully, one of the kids took notice of a really big bunch of balloons that hung on a sign across the street, and sarcastically asked if maybe we could try to hit them instead of the pole. Our hands were so numb we were basically palming the snowballs at this point, so even this toss wasn't a gimme. But, one of the other guys managed to hit them on his first throw, and we were all glad he did. I was a bit bitter, but relieved.
Jay Peak skiing snowballs Stowe