March 18, 2010
Ok, I think MTA gripe 1 should have been split 50/50 with the town of Southeast, given the very odd design of the parking lot and the placement of the parking and ticket machines. MTA gripe 2, however, rests squarely with the MTA.

I had afternoon plans in the city and then had a ticket to the Rangers game in Madison Square Garden that evening. So, I took the train down to Grand Central, made a few stops on foot, and then met my good friend and headed to the arena.  As I noted in MTA gripe 1, there are limited trains available during non-peak times, and my options to get home after the game were either a 9:56 pm or a 12:06 am train.  Hockey games usually end just after 9:30, and I realize that I will have to escape the Garden crowd, get downstairs to Penn Station and the subway, take that uptown one stop, catch another subway or the Shuttle across to Grand Central, and then get to my train.  Believing that every second is going to count to have a chance of catching the 9:56, I try to be smart and purchase my subway ticket--a single-fare ticket--before entering the Garden. 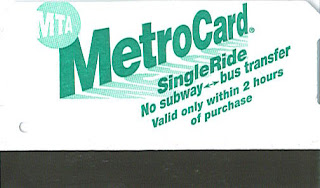 Well, the Rangers won the game, and it was clear in the third period that they had the game in hand. With just a minute or two left, I bolted down to Penn, swiped my card, and…nothing.  I swiped it again…nothing.  I’m baffled.  I then looked at my card and see that it is valid for two hours from the time of purchase--this information is clearly printed right on it yet I failed to notice it until swiping.  I haven’t been back to see if it says as much on the ticket machine.  But, what is the point of this time limit?  I can’t believe that I am the only person who has come into the city for an event--be it a hockey game, Broadway show, meeting, etc--who knew that they were going to have a tight schedule and a tough time catching their return train. Sure, most riders buy a single-fare ticket and immediately swipe it and catch their subway, but there have got to be others who try to plan ahead. Am I the only one to fall for this seeming trap?

Multi-fare plastic MetroCards--and, for that matter, paper MetroNorth and LIRR tickets--all have something like six-month expiration periods, but for those of us not riding the subways often, what recourse do we have?  Buy a multi-fare MetroCard that we don’t need? When I wrote to the MTA to ask about their reasoning, their response was “A single-ride paper MetroCard…is meant to be used at the time of purchase. This policy exists to protect our revenue and to minimize the opportunity for fraud.” Hmmm.  Protect their revenue or generate revenue? I guess there is no point in planning ahead.
MetroCard MTA