Ok, I think I’ve developed my last roll of film

March 26, 2010
I remember throwing out the one-gallon containers that I used for mixing and storing film-developing mixtures before moving in late 2005. I had bought my first digital camera in 2002, and stopped using my film cameras by early 2005. So, when packing up my apartment later that year, I looked to thin out a large chest of camera gear and did something of a purge. Some bulky film-developing stuff and flimsy novelty point-and-shoot cameras were the primary victims. Really, I could have discarded more right then and there, but I decided to hold on to most of it.

Today, I went through the storage chest again and purged some more things: the remainder of items that hinted at film developing, a bulk film loader, a slide copier, and some old light bulb holders all bit the dust. What’s a bulk loader? It’s hardly worth explaining, but it was a device that would take a long roll of film, and spool it onto reusable film cartridges. It was way cheaper than buying individual rolls of film, but I really never took that many pictures that it was a worthwhile purchase then and I don’t buy any film now. Similarly, my slide copier was an outdated device, one that mounted onto my camera like a lens. It would hold a photo slide and then, after messing around with distance measurements to light bulbs and a few other parameters, I could take a picture of the slide to create a negative for printing. It was a device made thoroughly obsolete by scanners.

I am, however, hanging onto other things in that chest: anything to do with flash lighting and a couple of outdated cameras were spared this time. My Ricoh A4-40 (which was my first camera, a gift received about 25 years ago) and my Seagull medium-format camera, after all, really don’t take up much room in that storage chest. After making the switch to an SLR in 1991, I stopped using the Ricoh, and I only dabbled with the Seagull for a few years after that. I then took them both along on a Vermont ski trip in 2005 to ensure they still worked. The Seagull is really a big clunker but takes nice pictures; the one below was taken with it. I’m not positive, but I think the picture was shot a short distance from the parking lot at Smugglers' Notch—this is not the kind of camera you throw into your pocket and then get on the ski lift. In fact, neither camera does anything that even the weakest of my three digital cameras can do. Regardless, though, they are safe for now. 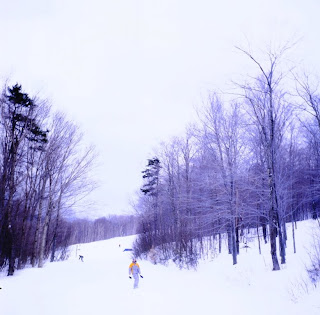