September 30, 2012
So here I am at University of Phoenix Stadium. I thought it was hot yesterday, but this is just wrong. I mean, NFL football in 100+ temps? 100-deg colder would be preferable to me. Ok, the game is indoors, but I still had to step outside to get here. Thankfully, the roof will be closed for the game, the awesome spectacle of the roof opening mid-game at Chase last night notwithstanding.

When the NFL schedule was released in April, I was hoping to swing something like this--one trip out west to knock off the last two baseball teams, and get to a Cardinals game the same weekend. The multi-destination ticket cost what I would have expected to pay for a round trip to either San Diego or Phoenix, so don't ever say HKHWR isn't efficient.

I meant to note yesterday the number or folks in town for both the Diamondbacks and Cardinals games this weekend. There are plenty. In fact, I'm not even the only nut who preceded these games with a trip to a Padres game. Despite the heat, I spent the last hour with a cool mix of fans tailgating on the lawn outside.

I've been intrigued by this stadium since it opened, finding the idea of a grass field that can roll around awesome. I'd love to be able to do that with my own lawn, especially if doing so would curtail its growth during those times when it damn nearly needs to be mowed twice a week. Regardless, I'm just glad we're indoors. I did look into a stadium tour, but they don't do that on game days for obvious reasons, and yesterday was just too tight.

The gridiron count is now up to 23 teams, with one additional venue at least planned before the curtain falls on 2012. Oddly, the San Francisco 49ers are now the only team west of the Rockies I haven't seen at home.

The Cards have looked great thus far, and, with apologies to Sliced Tongue, I am rooting for the home team, conference foe or not. Of course the team-neutral gear is on, though a black shirt in 100-degree weather has HKHWR feeling not so wise as he did yesterday... 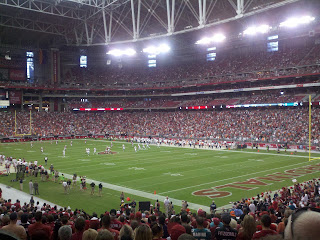