Hooray! HKHWR has done it, parking his butt in a seat at the ballpark of all 30 Major League teams. And, let me first say that...IT IS HOT! Wow! HKHWR doesn't do well in this type of weather, and really is just stymied by temps this high at any time of year, let alone in Autumn. I had noted two or three other weekends where both the Padres and Diamondbacks were home the same weekend, but one of two main reasons I opted for this last weekend of the baseball season was to hopefully avoid some of the famous Arizona heat...no dice. Thankfully, the 10-minute walk from the hotel wasn't too stifling.

Going back to the 70s, when I saw my first Yankee game at Shea Stadium (yes, the Yanks called Shea home for a spell in the 70s) to today, I have seen all 30 teams play in 38 or 39 ballparks. It was in 1991 when I first hit the road for a ballgame, first traveling to Baltimore, and then a few weeks later making a day trip to Boston. It wasn't long before deciding I wanted to get to all of them. And today brings a partial close to that journey. I'll post an updated roster of ballparks I've hit and the date of each game when I return.

Next season, I will hit the last three ballparks I haven't visited--in Miami, Cincinnati and Detroit. Sun Life, Riverfront and the old Tiger Stadium are fine placeholders on my list. What's next after that? Finishing the football stadium tour, first seeing each team at home, and then any newer stadiums I haven't seen. I'm making some nice progress on that, but give me about 5 or 6 years. After that? Maybe the hockey rinks for the original six teams, and then the Canadian teams. Then I have this outlandish notion of seeing a sporting event (including MiLB or college football games) in all 50 states. Hell, I recently realized that I am at least halfway there, which has led to that last idea. We'll see...

So, it was black team-neutral gear yesterday, and it's hot-weather friendly white team-neutral gear today. HKHWR planned wisely for this 90+ degree nonsense. Cubs fans are well represented, though not to the extent that Giants fans made the trip to the game yesterday.

Oh yeah, the other reason I picked this weekend? The schedule gods hooked me up again this weekend. Check back tomorrow if that last sentence needs explaining...

Anyway, let me sit back and watch this game. 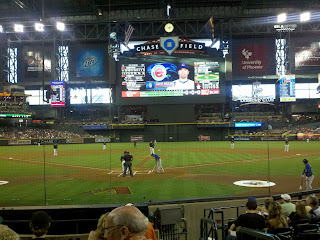