September 28, 2012
So here I am at Petco Field. Can you feel the excitement? Have you been checking back here daily or weekly since my post in Minny about the serious progress I'd be making in the first phase of this ballpark craziness? I hope you have. Petco is the ballpark of the penultimate team I've yet to see play at home. I'll hit that last one really soon.

I flew into town last night, and I'll be heading out in the morning. Yes, HKHWR is up to his old tricks. It's been a few years already since I've been to San Diego. So, today, I walked around the Gaslamp District for a bit, ferried to Coronado, where I found the Coronado Brewing Company, and now I'm settling in to what brought me to town.

I know a bunch of people who have been here, and everyone gives it high marks. I walked around the outside of the ballpark early today, as my jet-lagged self was rather energetic earlier in the day than usual. It is an impressive sight, with a large footprint that doesn't feel squeezed into a tight spot of real estate like some other ballparks do. Nice look inside, with a friendly vibe all around.

I'm wearing the black team-neutral MLB gear, figuring it would be wise to save its white equivalent for a hotter day. There are plenty of Friars fans in their 70s shirts, their current ones, and loads of Giants fans who made the trip.

It's also worth noting that today is the one-year anniversary of that fantastic night of baseball, where, within minutes of each other in some cases, post-season hopes were dashed (Boston and Atlanta) and realized (Tampa Bay and St. Louis). I had some reservations about not watching my Yankees in their home stretch, but ultimately decided they can handle business with me merely keeping an eye on things from afar. Nothing related to the postseason will be decided at this game, and that's fine.

Anyway, on to the game. And, you might want to check back here around this time tomorrow... 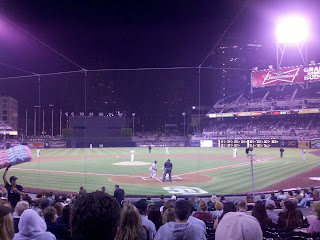