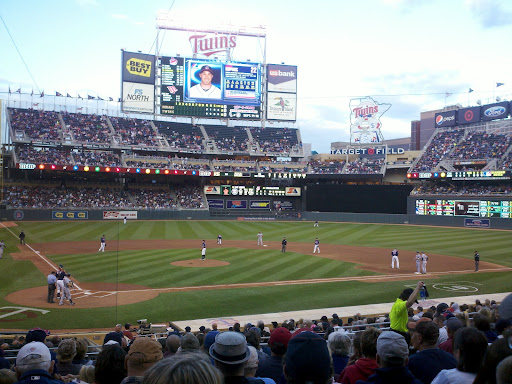 So here I am at Target Field...wait, Target Field? Seriously, HKHWR? That's right, for while the stated goal earlier this year was to knock off ballparks of teams I hadn't seen play at home (a goal that will be realized by season's end), and I did endure one at the Metrodome, one of those sweet schedule alignments was noted back in April, and I booked this little weekend jaunt. Yeah, me, and a number of observant schedule hounds: The Vikings are home tomorrow, so it's another two-games-in-one-weekend event for us. This is a rather good September for that, as the MLB and NFL schedule makers have nicely set us up. More on that in a few weeks.

I picked a hotel within walking distance of both stadiums. It was another Marriott one that was converted from a train station. After arriving, I walked over to the very nice Town Hall Brewery, where I talked to several locals over a couple of pints, including the recommended and simply sensational Dortmuder Export Lager.

So, yeah, anyway, I was planning to visit the ballparks of the three teams I hadn't seen this year, and then next year see the four teams who had replaced their ballparks since I was there. But, why put off until next season what you can swing this season? This ballpark makes 37 overall, and, again, leaves me with 2 teams and 5 ballparks to go. As this looked like a really nice one on TV, I did want to see it myself anyway, regardless of the count. It is a drastic improvement over the Metrodome, which I will sit in one more time tomorrow, with its new name tag. Who knows, maybe its football configuration will be less odd. But, that can wait a day. This is about Target Field...

When I booked this trip, I had no idea what was scheduled this evening, only becoming hip to it yesterday: They're retiring Tom Kelly's number 10. It's a great ceremony with all of the great Twins going back to their beginnings being acknowledged. The Twins fans were certainly into it, as is this baseball fan.

So, I had my pork on a stick, I've got on my usual team neutral attire, I got the awesome and unexpected perk of a retirement ceremony, and am now definitely ready for this game. Go Twinnies!