September 09, 2012
So here I am at Mall of America Field, 19 years after my first visit to this stadium, you know, when it was still the Metrodome, which it still mostly is. As I noted yesterday, I am seizing the opportunity to get to two games on one plane ticket, since the schedule gods kindly set both the Twins and Vikings up at home this weekend.

Because the hotel is so close to the Mississippi, this morning I took a nice stroll along and across it, ending up in St. Paul before heading back to check out of the hotel and head over to the stadium.

I tend to think of ballparks I like more than ones I don't particularly care for, but, as a ballpark, this was bottom three. As a football stadium, well, it's a dome. A rather typical and I suppose dated one. The outfield walls that had those weird baggies are nicely tucked away, however, which is an instant improvement over its baseball configuration. The roof is nicely stitched up too, so I've no fear of a collapse, even if an open air stadium would be preferable at the moment as it's beautiful out. And, I looked, but don't see the vampire seats, but maybe they only come out for baseball. I probably could have settled for a Vikings game at the new stadium being drawn up, but I like Minneapolis and will happily make the trip again in the latter part of this decade when it's built.

Anyway, this is the first of three new stadiums for sure this season. The Vikings are the 22nd team I have the good fortune of seeing at home, so I really feel like headway is being made in the touch-them-all quest.

It should be a good game for two so-so teams. MJD vs AP would have been a marquis matchup of two of the league's best, but I'm not expecting much given the holdout of one and severe injury of the other. Yes, I'm sporting the team neutral gear, but of course rooting for the home team.

I have a long evening ahead, as I head to the airport after the game. Who plans these trips for me anyway? Oh yeah.... 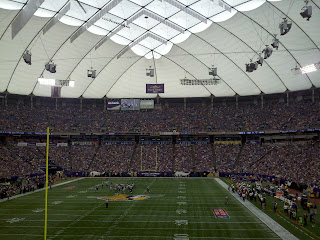