September 25, 2011
So here I am at the Edward Jones Dome. For the past few years, I've kind of thrown a dart at the NFL map, and thought "I want to see a game...there". St. Louis was that city this year. When I realized that their baseball team was home this weekend too, well, this game became the target.

To my surprise, there are many similarly minded fans out there: my flight from New York yesterday had many sports fans who had also noted that they could get to a baseball and football game in a different city (and New York teams are not playing St. Louis ones this weekend). Other fans noted that the two Arizona teams were home too; I believe there were other cities with dual baseball/football games this weekend. That this team is on the rise, though, is a nice perk. That they're playing the Ravens means I have the villain to root against, so it's all good. If the Rams can't clobber the Ravens, I will certainly settle for a game that had the exciting finish the Cards game had yesterday.

It's September football, so I'm not bundled up. It's also a dome, so weather isn't a factor at all, still, it was a nice little walk from the hotel over here. This is the first of a few football stadiums I'll be hitting this year, and no doubt I'll be bundled up down the line. For this one, I'm sporting my spanking new team-neutral NFL shirt. Last year, I felt a bit foolish, absentmindedly wearing a shirt that looked to be the colors of the visiting 49ers rather than the colors of the home Panthers. Now I don't have to think twice about that.

Attending this game is my second NFC West home game. How is this for balance? I realize that I've seen a game in half of the stadiums of all eight divisions, but haven't been to all four in any division--yet.

I do prefer outdoor stadiums, but domes are fine, if not really noisy. This place is nice enough. Nothing really jumps out either way. I have a great seat that seems reasonably priced, and I know that my Giants won in Philly, so the next few hours are football gravy.

Anyway, back to the game. 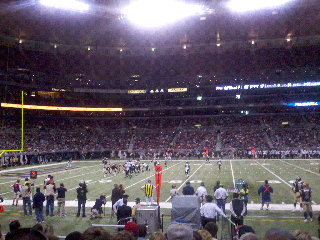