June 16, 2010
The rhododendron is the one shrub that has probably interested me longer than any other, largely because of a huge one we had in the backyard of the old family home. For most, its appeal is the flowers that bloom in May, but I think I liked it more as a winter shrub and indicator of cold weather temperatures. Evergreens in general provide some signs of life when all other plants are bare of such evidence, but there is something fascinating about the way the leaves of rhodies start to curl up to let you know that it is cold outside, or really twist up to let you know it is very cold. 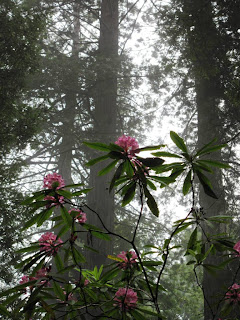 Their appeal to me increased as I got into photography, and noticed several frequently recurring shots in photography magazines that I wanted to duplicate. One was of a moose standing in or near a lake with a mountain backdrop, another was white birch trees ablaze with golden foliage in late autumn, and the other was the rhodies under a canopy of monstrous trees in the Redwood National Forest. I’m still trying to acquire the shot of each that I want, but I’ve come closest to capturing the last one.

When I bought my own house, a big rhododendron in the front yard was the only shrub I could identify. And that winter, it let me know if it was below freezing, and made me shiver from inside my toasty walls when I saw the leaves damn nearly turn inside out when temperatures sank close to zero. Further, its buds lured all sorts of birds, such as this nuthatch, which I photographed right from my window. 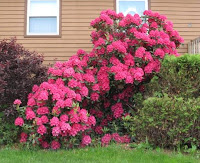 Well, May rolled around, and all those buds opened up revealing big red flowers. Lots of flowers. Over the next few years, it grew quite a bit, so I needed to figure out how and when to prune it. I’ve learned that things like forsythia can be pruned whenever necessary. Then again, I made a maple tree cry for a week after pruning a low branch last spring (I now know these should be pruned late summer or fall, but not in the spring—it turns out that such mistimed pruning is just unsightly and actually harmless, but water did ooze from the severed limb for literally 7 or more days). 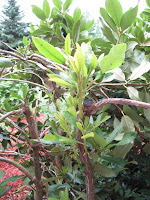 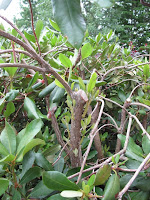 With the rhododendron, I didn’t want to make a mistake, and so asked a number of knowledgeable people and checked a bunch of different web sites, ending up with a bunch of different answers:
1) Prune the limbs in early spring so that the energy put into opening the buds is put into generating new growth, which made sense. 2) Prune them after the flowers are gone so that you, well, get to see the flowers, and also that is the time when new growth is generated, which also made sense. 3) Prune them while the flowers are in bloom, for reasons I forgot. So, what did I do? I pruned some branches before and some after, and guess what: It doesn’t matter! New growth is clearly evident around the cuts made before (coated with black dressing) and after (untreated) blooming. 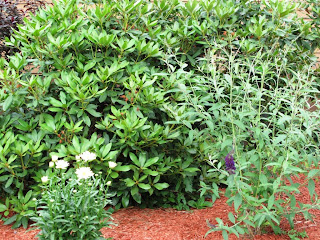 With the flowers gone, it is now a big green shrub for the rest of the summer and fall. So, I’ve planted a number of other shrubs in front of it, which should create some color for stretches through the summer and into the fall. Pictured here are some just-blooming Shasta daisies and a butterfly bush with a single purple flower. 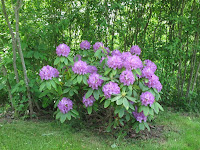 In addition to the big red one that came with the house, I have three purple ones scattered around the lot, and they are doing fine. One is clearly growing quicker than the others, which is to be expected, as it is in an area that doesn’t drain very well and gets shade for a good part of the afternoon.

It's a great shrub that's easy to maintain, and it simply adds to the landscape year round. I'm sure I'll be adding more.
landscaping nuthatch photography pruning Redwood National Park rhododendron