June 29, 2010
There are things we all can do to help the environment, and being a homeowner on a lot that is over an acre means that there is always ways for me to do more. I’ve discussed in earlier posts that I have planted a bunch of trees; in fact, I can almost see them sucking the CO2 right out of the air. Offered here are a few other things I am doing.

In addition to the trees, I’ve also mentioned in earlier posts that I have created and enlarged planting beds to lessen the amount of mowing I need to do. I’ve removed grass around corners to minimize both the string trimming needed and the back and forth with the lawn tractor, decreasing the time they run by about 20-25%. Conversely, I have seeded other areas, to prevent erosion and runoff of dirt and other matter into area streams.

This surprises many, but neither my neighbors nor I water our lawns—Mother Nature takes care of that. Cool nights in the Hudson Valley mean lots of condensation in the morning; coupled with the typical annual rainfall, my lawn usually stays green enough through the summer. This year may be a different story, as it’s been pretty dry these past few months, but I’m sure the browning lawn will ultimately rebound.

While the lawn can survive without a hose or sprinkler system, most shrubs need to be watered. Sure, sometimes mine get hosed, but I make good use of a rain barrel, which is filled with rain water collected from the roof. It amazes me how quickly a good storm fills it up. Truth be told, I’m not crazy about filling up a watering can with the barrel’s water and dragging it around the yard, but I feel the all-around benefits of doing so are worth the effort. 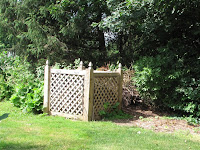 Beyond water usage, a compost bin shared with my neighbor is another step in our green effort. Unconsumed produce, grass clippings, and much other yard refuse end up in there. I can’t say that we’re terrific in rotating the contents of the bin (ok, full disclosure: we’re pathetic about it), but we keep throwing stuff in there, and it keeps disappearing. To be fair, though, we took a stab at emptying it a few weeks ago. What did we find inside? Dirt! Black, black dirt—the stuff that costs a couple of bucks a bag, and we got a few bags worth for free… If nothing else, tucked into the corner of our yards, using it helps us keep both lots looking cleaner and greatly reduces the amount of material we would need taken away.

Then there are some methods of environmental friendliness that I find amusing, starting with ant control. For my first few years here, I used more insecticides than I wanted to keep them at bay. When I read that coffee grounds were an effective deterrent, I balked, only believing the ants might move with a much quicker gait once caffeinated. Still, I figured there was no harm in trying. So, since March I’ve been collecting coffee grounds and spreading them on known ant holes. Sure enough, I’ve seen far fewer ants this year. Now, after several weeks, a few seem to return, but, I keep drinking coffee, and don’t figure to run out of grounds any time soon. I just go back to the same spot and spread more grounds, and they disappear again. I have a hunch that I will outlast them. 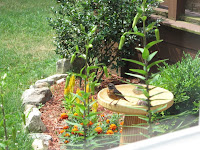 Finally, a birdbath added last year has surprisingly contributed to my effort in being more environmentally friendly. I had read how a reliable water source is more valuable to birds than is a bird feeder. While it is nice enough to watch many different birds drinking and bathing in it (I snapped this picture of the robin earlier today), birdbaths near the house are said to have the added benefit of mosquito control. On more than one occasion recently, I have seen birds dive-bombing that side of the house, clearly feeding on insects. I haven’t had the camera in hand as this is happening, but it is remarkable to witness. On one hand, it has me thinking I might need an exterminator, but there really are fewer mosquitoes around—without using chemicals. This may be due to the generally drier weather, but I prefer to think it is my green effort.

None of these will make a major dent in reducing my carbon footprint, but they all strike me as steps in the right direction, and more will no doubt follow.
eco friendly yardwork