May 18, 2010
I've taken down more trees here than I ever thought I would. Mother Nature has knocked a few over, old age got to a couple, and some poor landscape design (planting big trees too close to each other) and troublesome shedding have led to the demise of others. My intention is to plant at least one tree for each one that comes down. I'm a bit behind in that regard, but I will get there. Some of the trees I have planted and described below are coming along great, while the progress of others is slower.

I'll apologize here for some of the weak pictures: green trees don't always stand out when photographed against other green trees or shrubs--many of the pictures were taken only so that I can check growth over time. Further, I don't always take a picture of something I plant--it's just not something I think to do. Still, I think they all help tell the story. 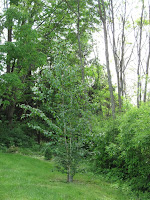 Among the very first trees I planted was a white (paper) birch. Few trees make me think of northern New England camping and skiing like these trees. Further, they've always jumped out at me in photography magazines, with their white trunks and yellow foliage. When thinking of the different trees I would be planting, it's one I was sure I would try. This particular one is among those that I didn't photograph when first planted, but I did buy it in a three-gallon bucket back in 2007 and it fit easily in my car. That would not be the case today. Now that I look at the picture, I realize the lower branches could be pruned, but it's just nice to see this grow and fill, especially over last year and this spring. 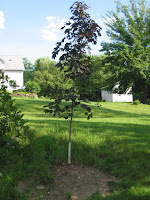 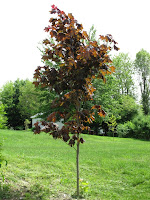 The next tree I planted was a Crimson King maple. I planted this at the same time I planted a number of hollies. I think of it as my old-time classic/prog rock landscaping stretch... It did fine when planted in 2008. I picked a spot along the end of my forsythia "hedge". Both have combative roots, and I figure I'll let them fight it out. It's also planted about 30 feet from the house, in line with two other trees I planted, giving me a great view out of a window I had installed in my kitchen. Unfortunately, over the first winter, it was the victim of deer rub, with the bark along about a two-foot length of the trunk rubbed clear away, and it did little last year. But, it seems to be rebounding this year. Only time will tell. 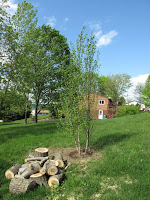 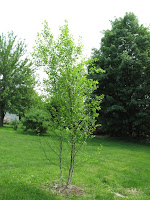 Last spring is where I did my serious planting. The viburnum was the most interesting addition to the yard, but the trees purchased at the same time all have potential. Among them was the tallest tree I've planted (10 feet), and another member of the birch family--the river birch. For as rainy as it was last year, the one week where I needed it to rain was the week following when I planted this, as I was traveling that week. As luck would have it, it was bone dry and the tree lost a number of lower branches, but made it fine after that. I hope the worst is done, as I think this tree and spot are perfect. It's the second one in line with that maple, and in front of the white birch. It replaced a giant cottonwood (that's its remnants pictured all cut up on the left), which dropped cotton every June--a real nuisance to the lawn tractor and nearby pools. And, AND, the river birch has much smaller leaves, making for easy cleanup after its nice yellow-foliage display in the fall. 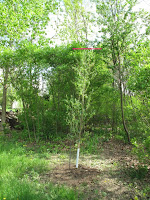 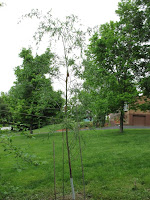 In that same shipment with the viburnum and river birch was a weeping willow. Another tree I've always liked, it was about six-feet tall when purchased. Basically a skinny trunk with some small branches, it did not at all resemble a weeping willow (I added a red line in the photo on the left, to try to show its height). It's planted in an area of the yard where the ground is notoriously wet, and it's thriving. Within two months, those small branches started drooping, taking the shape one pictures when envisioning a weeping willow, and it reached up to 10 feet by the end of summer. I had to rig a second level of support for it this past weekend: the upper portion of the tree has surprising mass, yet sways wildly in the wind, although I think I have that better managed now. I would like to see the trunk fill out and strengthen, but my plan of having an overgrown area overtaken by this rapidly growing tree is, um, taking root. Twice now, I have cleared away branches of some of the nearby shrubs; in fact, I cleared enough to get in behind it and take a picture that lets it pop out a bit more. The willow owns this part of the yard. 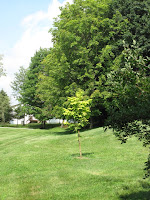 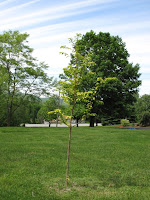 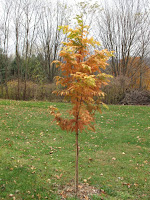 Finally, there is my dawn redwood. I had never heard of this tree before last winter, and I had my doubts about whether it could survive here. A combination of a slightly warmer climate and more acidic soil is what this tree supposedly wants. Now, I can amend the nearby soil, but I can't control the weather. Sill, this redwood, which has needle-like leaves that turn reddish-brown before falling off and revealing a reddish trunk, may make it. It's supposed to grow quickly once established. I note when looking at these pictures, however, that, although taller, it is not as full as it was last year. Like with the others, only time will tell.

It's nice to see smaller plants and flowers grow. It is quite another to see these trees do well in the yard. One of the nicer sights last year was seeing a robin sitting atop the weeping willow fly over and land in the river birch, and then move over to the dawn redwood. I viewed that as good luck, as though the trees had officially become part of the landscape.

I think they'll all be here for a long time.
landscaping trees