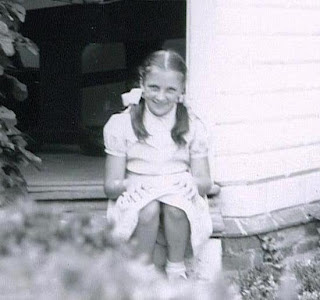 Pat is my dad’s first cousin, making her a first-cousin once removed to me. Today would be her 70th birthday, a fact I stumbled upon just recently when scanning family pictures and remembering some of her story. Near the top of this post, she's first pictured by herself, then with her mom, and then again with her mom plus my grandmother in 1950; below, she is pictured at a gathering that took place between her and her uncle's families, and finally she is shown at the wedding of her sister. The youngest of three, she and her family and my dad and his family got together often.

Unfortunately, there are many who experience in their own families or close circles tragic loss, when someone is taken at a young age, and that is the case with Pat. Those who haven’t personally faced such tragic misfortune no doubt have had a chord struck when a news or internet story pops up about such calamity. At age 16, she was killed in a car crash. The car overturned into a small ravine and she was the only one of the six in that vehicle who didn’t make it out. What became of the others I do not know (nor do I know what led to the crash or if another car was involved), but they may well still ache from the loss on that night at the end of the summer of 1956.

My dad’s mother was one of 13 children, 11 of whom survived to adulthood. He has many cousins resulting from the large family. Still, he told me as we were going through the pictures that he wonders what would have become of her. Would she have married, and had kids? Would she have become a pilot like her brother? Would she have gotten involved with horses like others in her more immediate family? Nobody knows. My dad is still close to her older sister, someone who I know and think of quite fondly, someone in fact who shares the same interest in family history as I do (not to mention aided me in that effort tremendously). 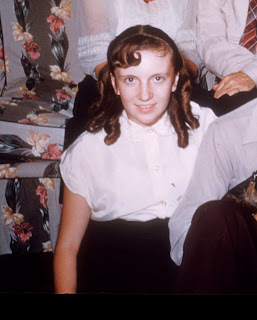 That family of 13 has seen its share of tragic losses. Without getting into specifics, I only note that there was another fatal car crash involving one couple, two of the siblings were lost before the age of five, and several of the children who survived to adulthood only made it into their 30s and 40s before succumbing to health issues. Still, though, there is Pat, taken before her life really got started. 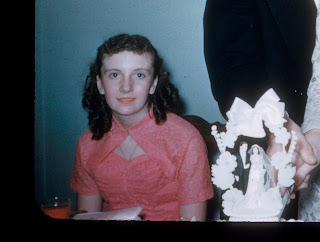 RIP, Pat Crossland. More than 50 years later, there are those who wonder who you would have become.
family history old family pictures Pat