May 14, 2010
As I make it to more and more of the MLB baseball stadiums, I’m getting asked more frequently if I’ve taken a picture in each ballpark or kept the ticket stub. Most of these games were attended during the "pre check-in" era of social media, so I suppose I need other ways of proving I was there.

Well, it turns out that I have retained just about every ticket stub. Although I have lost a couple along the way, I got into the habit of noting the score on them and throwing them into an old cigar-box-type storage case. I have also taken pictures in many cases, but far from all of them.

Here I will share a brief memory of each stadium, and post a few pictures from some of the games. Since I live close to the home turf of the Yankees and Mets and have been to their old stadiums many times, and their new ones once, I will skip further mention of them.

I’ll list these visits in about the order they occurred. In cases where I have been to both the old and new stadiums of a given team, however, the comments will be given together. Finally, where it isn't obvious, I will try to make it clear at which of a team’s stadiums I watched the game. Here we go...

Orioles: I met up with family and friends to see a game against the Yanks. It was 1991 and I think—I think—Cal Ripken played that day. Fun, extra inning game.
I also went to Camden Yards a couple of years later. There was a lot of excitement about the opening of this new ballpark, and, as Baltimore is an easy trip from New York, I drove down to see it. It was simply an amazing place to walk around and to see a game. 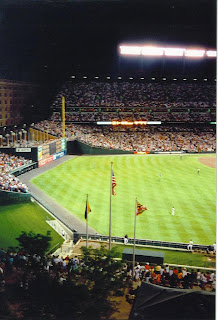 Red Sox: I made a day trip out of it from NY. Parking was insane, but all baseball fans should be required to see a game here and at Wrigley. There’s nothing like seeing something in person after seeing it so many times on TV (i.e., the Green Monster, the press boxes, etc). 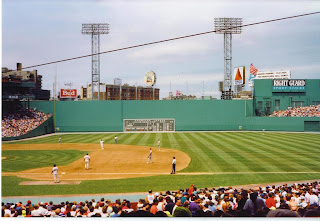 Cardinals: This was the first of four games I saw while on a 1991 Midwest swing. Forgettable stadium and game, but the Stan Musial statue and view of the arch were cool.

Royals: The closest I’ve come to catching a foul ball occurred during batting practice of this game. The waterfalls beyond the outfield walls gave some personality to the otherwise forgettable stadium, which kinda had me wishing I was across the parking lot in Arrowhead instead. 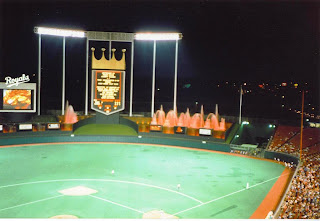 Brewers: Bratwurst...I remember a really good bratwurst at the game. It could have been that I had eaten poorly on this long trip, but I remember that the food was the best of any stadium I had visited to this point.
New Stadium: In 2001, requesting a “best available seat”, I was sitting in about the fourth row and between home plate and the dugout on the third base side. I thought this place was a big improvement over the old stadium.

Cubs: Like Fenway, there is no not liking the place. It was a fun crowd, and fun game. I remember leaving my seat in the 6th inning, and watching the final few from different parts of the stadium. Great stuff.

Giants: I attended a day game, right after a cross country flight in 1993. I had a bleacher seat, which I think contributed to just an ok experience.
New stadium: The downtown location really works! I went while on a business trip in 2004, and remember checking in with the office from my seat. I was in the scouting area behind home plate, and hecklers near me getting to the pitcher, which in turn caught the attention of the scouts. Incidentally, I think that guy at the plate was on something… 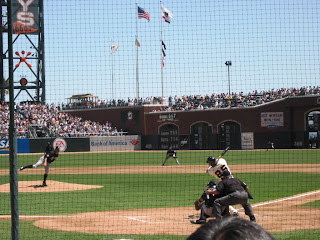 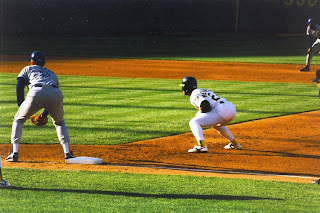 Indians: I went to see a couple of Indian-Yankee games with my friend Larry in 1993. They won one, and lost one.
Six years later, I went with my friend Greg to the Jake on our way to Tiger Stadium. Plain and simple: small stadiums in downtown areas work.

Twins: I just didn’t like this place as a baseball stadium. But, during BP, I had a nice chat with visiting Rickey Henderson about going after 3000 hits (it was late 1993, and Dave Winfield had gotten his 3000th hit a night or two earlier).

Blue Jays: I went with my brother in 1994. They retracted the roof during the game. I think they said it was the second time they had ever done that.

Rangers: After passing through DFW a number of times, I decided to make a layover in 1996, and “see Texas”. So I went to Dealey Plaza and the Ballpark at Arlington. It reminded me of Camden Yards, but loses the latter’s charm by being in the middle of nowhere.

Rockies: I was visiting New Mexico and Colorado with my dad in 1998. The night before our flight home, I went to a game. I’m pretty sure I was burning off a roll of b/w film with this shot… 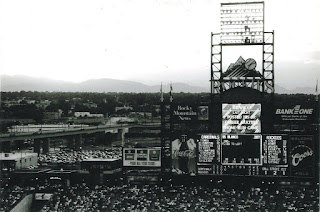 Phillies: I went with family to a Yanks-Phils game in 1998. Schilling and the Phils dominated.
New stadium: I made it last year, again with family. I actually liked the stadium. We sat behind a group of guys on a bachelor party. Given Philly’s rep for rowdy crowds, this seemed like a bad mix, but the good manners of these young men were startling.

Tigers: I went with my friend Greg during the stadium’s last year. It was an awesome experience, seeing that right field overhang and cavernous centerfield, and thinking that every great American League player for the last century had played on that field. The experience was on par with seeing a game at Fenway and Wrigley. 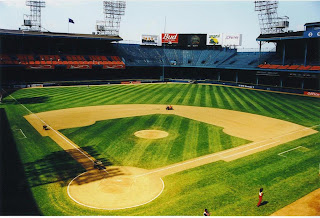 Reds: I had seats directly behind home plate on the second level of the old stadium. A screaming line drive by Ken Griffey made a bunch of us take cover.

White Sox: I watched the Yankees lose here in 2001. The ballpark struck me as faithful to the Old Comiskey Park, which I regret never seeing.

Mariners: Its cool downtown location, another great seat, and that I was on a business trip added up to a fun experience in 2004. 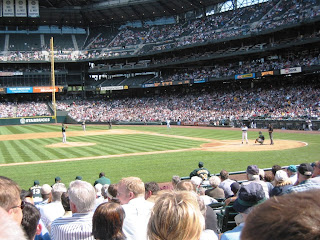 Nationals: I went with Sliced Tongue in 2007. We were busy catching up, we didn’t have great seats, and I really don’t remember following the game that closely.

Rays: I saw CC and the Yanks whoop Tampa, and got to meet Roy White. I explained more about this and the Marlins visit in an earlier post.

Marlins: I was one of only a handful of fans at this very exciting game. I’m curious about how attendance will be at the new stadium.

I don’t know if this will make doubters believe me, but it is great to reflect on some of the places I have been fortunate enough to see.
ballparks baseball travel