Remembering those who served

May 31, 2010
Memorial Day is one of my favorite holidays. While the meaning of many holidays is lost or altered, the reason we celebrate this last Monday of May seems well honored. Sure, it is a day off from the office or school, it is the unofficial start of summer, and it is the day of barbecues, baseball, beaches, and pools. But, it is also the day everyone is reminded to pause at some point, remembering those who fought for our right to exist: Flags are flying everywhere; parades are taking place down main streets all over the country; and frail, brave gentlemen who made it home 65 years ago are out in force to help mark the day.

Of course, the soldiers who fought in wars before and after World War II deserve mention too. In my own family, I remember being told as a child about two relatives who fought in the Civil War, one of whom was killed when thrown from his horse on his way home. In further tracing of my family history, I learned that one of my sixth and fifth great grandfathers were veterans of the American Revolution. When finding their burial locations near Reading, PA, I was surprised and somewhat humbled to see flags placed at their tombstones. 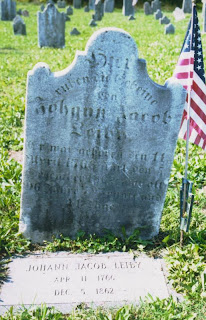 Though I respect the soldiers of past and current wars, I can't think of Memorial Day without recalling a trip I made to western Europe in 2002, on which I took an excursion to Luxembourg to visit the American Military Cemetery and Memorial, the final resting place for many of those who gave all at the Battle of the Bulge. It was a chilly March day, yet the cemetery was immaculate, with the grass green and well manicured. 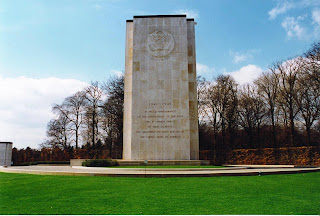 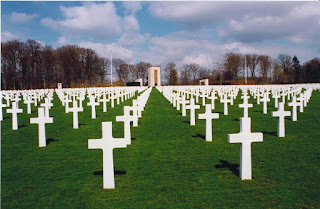 Among those laid to rest here is my Dad's cousin, Lee W. Allen. He was killed in action on January 8, 1945. I have read about this day in the battle, I have seen Lee's Individual Deceased Personnel File, and I have written to others in his Division to learn about him and the unit. Trust me, there are parts of that IDPF that are tough to read, though not surprising given the conditions the 17th Airborne were enduring at this time. 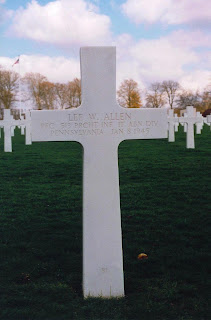 Learning about what happened to Lee specifically and others who fought in this battle, and in other battles in both theaters of this war, however, seems like the least I can do. Remembering those who fought in this war and all wars before and since, and who are fighting in wars today, is really the least any of us can do. We should especially honor those who have given their lives for our great country.