More on how I got going on skis

April 19, 2010
We're in the second half of April, and I haven’t skied in nearly a month. Still, the Fan pages of some northeast resorts, most notably Sugarloaf, are posting reports of their spring conditions: 8 inches this past weekend?! That got me thinking back to some of my early ski posts here, and some of those first trips I took when I was just trying to get going on skis.

In one entry, I alluded to a 1998 lesson at Stowe, and wrote that I would post about it at some point. When my buddy Greg and I went up there, well, it wasn’t pretty. Owing to inclement weather, the trip itself took a good 3-4 hours longer than usual. Roads were slippery, it was tough to see, and I think I even suggested pulling off the road when I suspected that we wouldn't reach our destination until well after midnight. But, we arrived later that evening, and made our way to the Spruce base for our lesson the next morning.

The instructor for our group was Paco, who I think was the sheriff of a southern Vermont town during the week and a ski instructor on weekends. He had some useful catch phrases for his students. Stressing the essential point of staying forward, for example, he advised us to lean ahead and imagine that we were “hugging a beach ball”. He would instruct us to hug it whenever we got too upright. His other big catch phrase was “pump up the volume”. Basically, he explained that turning on skis was as simple as rotating your big toe: Imagining your big toes are radio volume control knobs (and, go ahead skiers, stand up in your ski position and try this…), if you want to turn to the right, then rotate your left big toe to the right; to turn left, rotate your right big toe to the left. Without thinking about anything else (body part or ski), the toe rotation causes the rest of the leg to turn the ski. So, all of us in the group would work our way down the beginner slope, with Paco prompting us all to pump up the volume to our left, or pump up the volume to our right. While mastering the turning, we did struggle on the lifts; I remember falling as I got off, tripping other people, and not keeping my balance. But, we were all getting the hang of the turning thing, and so moved to an intermediate trail.

Still in formation, we started to wind our way down the steeper pitch: we turned to the left, then turned to the right, then back to the left, and then…it happened. Greg failed to sufficiently "pump the volume", causing his skis to point straight down the mountain. He broke from formation and dropped into a tuck, picking up speed as he barreled downhill. Paco screamed from behind “Pump up the volume! Pump up the volume!…oh no…pump up the…” and then took off like a shot after my friend who quickly went from looking like Bode Miller to…Charlie Brown being hit with a line drive. He tumbled face first into the snow, with glasses, skis, hat, etc, flung everywhere. The rest of our group had stopped to watch—they looked on in horror, while I damn nearly hurt myself from laughing so hard. They thought I was cruel, but I knew he was fine. In fact, we got a few more runs in, and laughed about the incident for the rest of the day. We both told the story more than once—I from my perspective of seeing pupil chased by instructor, and he relayed what it felt like being in control for that glorious few seconds before the wipe out.

For Apres ski, we joined Paco at the Matterhorn, where he had already filled in his fellow ski instructors on what had happened before we arrived. Paco said he had never seen any student go down the front face of the mountain like a rocket, and all he could think about was the accident reports he thought he’d be filing. Greg and I haven’t worked together in about 10 years, but it is one of the first things we recall whenever getting in touch.

Many of my friends were settling down with their families by the time I got into skiing, but my friend Mike was game for a trip to Maine the next season. On what would end up being his last ski trip (because he made the unfortunate switch to snowboarding…), we hit the resorts at Sugarloaf and Sunday River, not to mention the Shipyard Brew Haus, Carrabasset Brewing Company, and Sunday River Brewing Company. As for the skiing, well, it didn’t take him long to feel comfortable. I thought I was doing pretty well too, as I had Paco’s turning mnemonic working in my head. On the second day at Sugarloaf (pictured below), we decided I was ready for one of the diamond trails. So, we started down, with Mike getting ahead of me pretty quickly, and me making my way down the slope with my left and right turns. Actually, I was skidding left and right down the slope. After what must have been a terminal few minutes, I heard “you know, eventually you’re going to have to point those skis down the mountain”. Hmmm, maybe I wasn’t doing as well as I thought. But, I tried to pick it up a bit, and I did make it down, only falling once or twice as I recall. When I later boasted to our friends about skiing my first advanced trail, Mike pointed out that I did, but that he “had to drag me down by the ear”. Ok, so turn left and turn right...but let the skis ride downhill a little bit in between. I can do this. 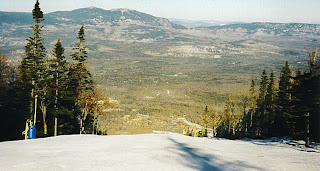 The next time on skis was a year later, on the guy’s first Whistler trip, when four of us went. We were not on the slopes for more than a day or two when I was given the final bit of advice that would help me feel better about skiing once and for all. The others pointed out that I had decent form, but it looked like I was working too hard to turn. When asked to flex in my stance, the problem leapt out at them: I wore my boots too loosely. I mean, my ankles felt nice and secure, but I didn’t realize that the boots had to be securely strapped from top to bottom not so much for protection but because they are what transfer the skier’s effort to the ski. With my boots appropriately tightened like a medieval torture device, turning became much simpler. By now, I was barely thinking about my big toes or volume control knobs, but I was making better turns and found that little effort was needed to set the travel direction.

That’s what it took for me to get going on skis. A lot of falls, a lot of laughs, but lessons learned all along the way. Alas, there will be no more of this until next winter, no matter what falls in Maine this month…
skiing Stowe Sugarloaf Whistler