I want a shrubbery, but not a green one

April 28, 2010
I’ve been planting stuff left and right since I moved in here. Plenty of grass was removed mainly to make mowing easier, and also because I heard one too many times that my yard was simply too green. So, I’ve tossed in everything from bulbs to trees, trying to get some non-green color outside from spring until my maple trees take over with awesome foliage displays in October.

The first things up are bulbs—I’ve buried dozens of daffodil bulbs, along with some hyacinths and narcissus bulbs, because, well, deer and rabbits don’t eat them. Yeah, they’re nice, they add color, and they're a general announcement of spring, but they’re not really unique. Next to light up are the forsythia. I’ve dedicated a post to that already, so I’ll gloss right over that here. A few other things that get color, however, are shown below. 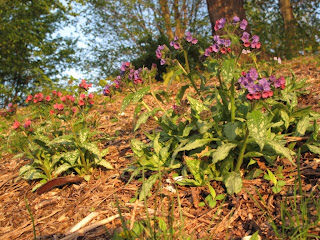 Pulmonaria, also known as lungwort: Sounds nice, eh? Well, when I bought them, the little stick in the pot labeled some “Gaelic Sunrise” and others “Gaelic Sunset”--that caught my eye, and is what I'd say is slightly better marketing. Like with the daffs, I was drawn to them because deer don’t eat them. In the nursery, they looked like hostas, and I was buying them to use as ground cover. When the first winter came and the leaves fizzled away, I figured that was it and I'd need to replace them the next season. But, they rebounded in the spring, and actually flowered, which I had no idea they would do. I don't know if the red or purple ones are the sunrise or sunset, and don’t really care. I bought more, though, and added about a half dozen in the yard. If I see them again, I will no doubt pick up a few more. They’ve been in the ground for a few years now and come back every spring. 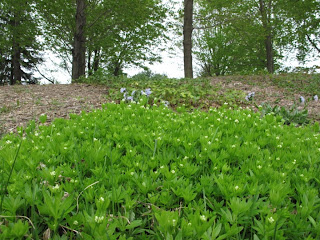 Woodruff: It’s actually “sweet woodruff”, and it’s supposed to smell nice, but I don’t smell a damn thing. Still, this is another groundcover that has done well, with a few small pots of these things spreading nicely. They get some small white flowers around this time, but they are mostly a short green shrub that spares me mowing on a hilly surface. Behind them in the picture are two of the previously mentioned pulmonaria. And behind them is a bed of pachysandra, another evergreen groundcover (hmm…maybe I’m not doing much to add some color afterall…). Really, it requires little maintenance, and again spares me from mowing a hill. One of the other things I’ve learned is that a lot of plants don’t do well under maple trees, which tend to hog up all of the nutrients in the ground around them. These plants have all done well enough though. 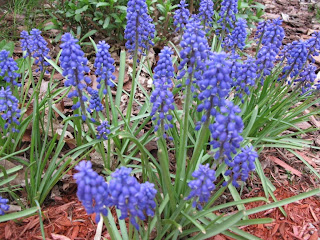 Muscari bulbs: They come up after the other bulbs. They're supposed to be blue, but they are purple. I had the idea at one point--for a verrry short time--of trying to make a flower display of the Yankees' or Giants' emblem, and I would have been disappointed had I set out to do this and end up with the colors of the Rockies or Vikings. Still, they fit in well with the rotating color outside.

With April nearing an end, a number of May bloomers are getting ready to take center stage in the yard. No doubt, more to follow on that...
landscaping muscari pachysandra pulmonaria sweet woodruff