April 16, 2010
The large amount of travel I've done for work means I have a decent amount of travel reward miles to use. I cashed some of these in to cobble together a long weekend in Florida. Now, the thing with reward programs is that there are restrictions on when you can fly, unless you want to cash in everything all at once.

My plan was to make it from NY to Tampa Bay this past Saturday and get to the Yanks-Rays 3:10 game. It's something like a three-hour flight without connections. And, there are billions of direct NY-FLA flights everyday...unless you're using points. I ended up on an 8:00 flight that connected in DC. In a way, I am glad it did. The connection was brief, but it allowed me to witness some of this scene: 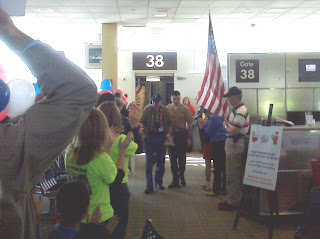 A flight with 183 World War II vets landed in DC to be taken to the WW II Memorial. They were given a much-deserved heroes welcome, which included a decent-sized band playing music from their era, as they got off the plane. I immediately uploaded this picture to Facebook while at the airport, but cleaned it up and brightened it for sharing here. It was a great sight, but I only was able to see a few of these brave men get introduced before having to catch my flight to Tampa.

I arrived in Tampa with plenty of time to get to the game, although the rental car dude used up plenty of it trying to force feed me everything from over-the-top upgrades to "must-have" insurance. Regardless, I got down to St. Pete and over to Tropicana Field easily enough, wandered around the stadium, and got to meet one of my favorite Yankees from when I was a kid: Roy White. I've never been interested in autographs, but after talking to him for a few minutes, I agreed to buy his book, which he signed. As for the game itself, well, I've never been to a ballpark with so many fans--including myself--rooting for the visitors. It was a friendly environment, unlike, say, Yankees-Red Sox games. The Yankees took an early lead, and CC Sabathia was dominant. He ended up hurling a no-hitter for the first 7 2/3. 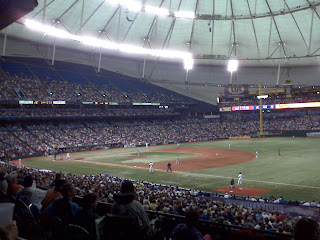 From St. Petersburg, my next stop was across the state, where I went to visit my vacationing Dad in Vero Beach. Here we are on the beach overlook near where he was staying. 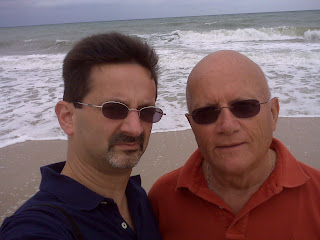 I don't know what it is, but I have this tendency to scowl when taking a picture of myself. I think it is me squinting at that little mirror on the back of the cell phone to make sure I have the picture properly framed. I'm actually happy in this shot. Here's a better picture (I'm not in it)... 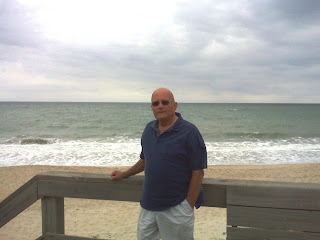 While walking on the beach, we saw some bizarre jellyfish... 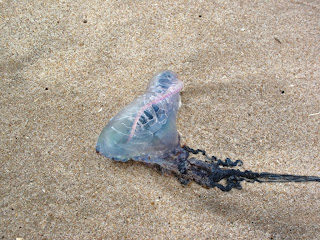 and lots of pelicans, one of my favorite birds to watch glide... 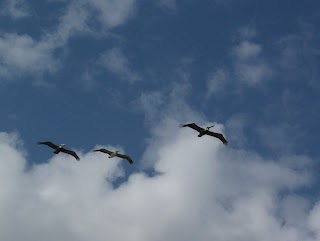 They just soar without flapping their wings for remarkable stretches.

After a nice couple of days there, I headed down to Miami, to fly home. I had planned on flying from Orlando, but, when seeing I would have to connect in Miami, I realized I could just drive the slightly longer distance and catch a Marlins game. 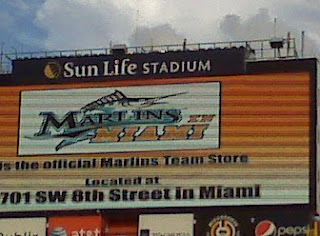 The Marlins were playing the Reds at the oft-renamed Sun Life Stadium. My seats were behind home plate, in the 13th row. I have never seen such an empty stadium, especially on such a pleasant evening. From my seat, this is what it looked like down the third base line: 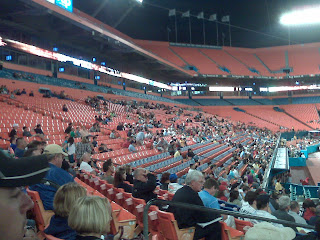 ...and there were no more fans down the first base line. I think this was the primary reason why I ended up being shown on the big screen at least four times: they just plastered 4 or 5 of us up there at a time, and just kept rotating around. Attendance was said to be 10,119, but there were far fewer fans there than that. Some blame location, which I don't buy, as it is centrally located between Miami and Ft. Lauderdale, and I know that it fills up for Dolphin games. Still, hopefully a smaller venue in downtown Miami will have the desired effect of getting more fans in the seats. As for those present, it was certainly a Marlins crowd, though plenty of fans from Cincinnati made the trip to pull for their team. As for the actual game, well, it was great. The Reds ended up winning in 10 innings.

So, it was a long but quite enjoyable weekend, and I got to check two more stadiums off the list...
ballparks baseball beach Florida