April 01, 2010
So, when I bought the house in 2005, I had this huge shrub at the top of the driveway. I had no idea what it was at the time, but it was suggested that I do something with it. 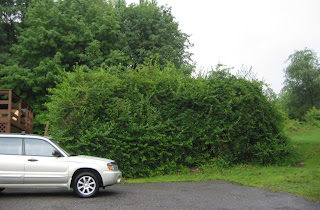 It was a tall, fat, and unwieldy forsythia. 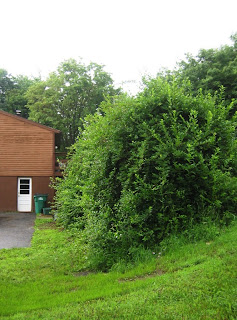 A landscaper told me that he would clear it out and grind out the roots for $400. When I said I'd think about it, he asked me if he could at least take a couple of pictures to show others what happens to these plants when they are not maintained! 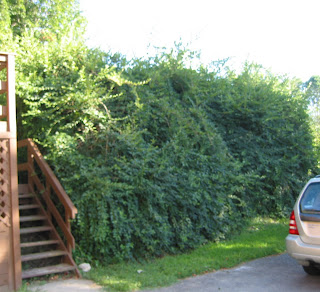 Others told me that I would never be able to prune it down to look the way I want. I decided to hold off on any decision until the spring, so that I could see what it looks when loaded up with those little yellow flowers... 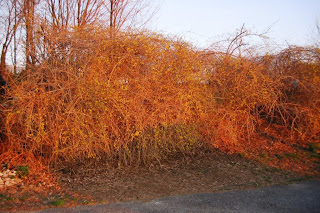 Yeah, something needed to be done with it.

So, mostly with loppers, I went to work, reducing its height and girth a few feet at a time over the next two years. I ended up with many debris piles, like the one shown here. 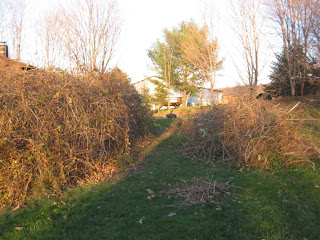 I also hacked out chunks of it with a pickaxe, transplanting it to other areas of the yard, and I gave to family and friends no fewer than 25 plants that I dug out of it. Size-wise, it was becoming more manageable, but whether or not it would rebound remained to be seen. 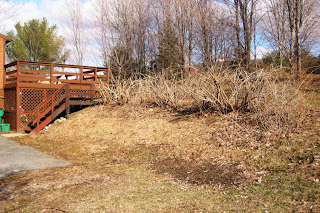 Last spring, I had my doubts, and wondered if I had gone too far... 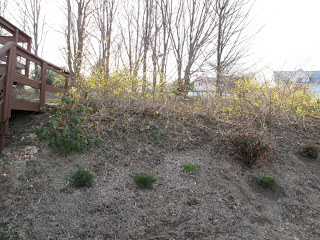 But, as the summer wore on, I began to wonder what kind of steroids this thing was on, as I had to prune it at least twice. It became clear that the forsythia was just fine. 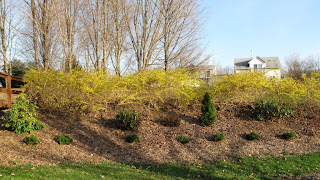 It's the first thing to bloom in the spring, and when the leaves replace the flowers, it provides shade for the laurel and rhodies that I added in front of it. With about two hours of maintenance needed throughout the year, it's really no trouble. I'm keeping it.
forsythia landscaping