May 15, 2011
A few years ago, using my Scandinavian Forest Axe, I felled a cottonwood that had an 8"-diameter trunk and stood over 20-feet tall. That was pretty cool. I've also precisely dropped a couple of 30-feet-tall maples with my chainsaw, guiding them to safe landings. Again, it felt kind of cool, and was certainly a relief when nothing got damaged, myself included. Then there's what I've done with the forsythia, but that is an ongoing effort.

Nothing, though, has given me the satisfaction that I took from my fight while planting my viburnum mariesii, chronicled in this wordy post. It's flowering now: 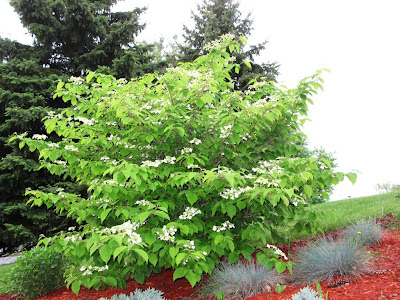 Yeah, yeah, yeah, I've posted pictures of it before. As far as plants go, though, it's simply the best $170 I've spent outside. Two neighbors have asked me what it is, and one just looked at it and told me that I should get into landscaping. I thanked him, but it is the shrub doing all the work. Now anyway...a helluva fight occurred in that very spot two years ago...
landscaping viburnum mariesii