August 03, 2013
And here I am in The Great American Ball Park. Huh, I've started a ballpark full of these posts with "And here I am in blah, blah, blah..." The name of this place, though, makes me want to say "And here I am at the...". But, I'm too close to the finish line to change my ways, regardless of what my ear says. I am here, though, which is all that counts. It's the penultimate one on this long journey, which wraps up tomorrow afternoon in Michigan.

I attended a Bengals game at the old Riverfront Stadium back in 1991; it was the first game on that first Midwest trip, where I saw four baseball games and two football games over 10 days. I came back to Cincy for a Reds game in 2001, after some remodeling was done to the old cookie-cutter stadium, and it had been dubbed Cinergy Field. Now I am seeing the GABP.

This season, I had hoped to see both the Reds and Bengals, or the Tigers and Lions, in one weekend, but the schedule gods did not comply. Instead, I found this weekend where the two remaining ballparks on my to-do list have home games, so tomorrow morning I have something of a drive.

This trip began with one of those stupid-early flights, where I made the reservations months ago based on economy and maximizing time in places I don't get to often. Well, I was up in the air by 6:00 am. Connecting in Detroit, I landed in Louisville. While in town, I made a stop that had been highly recommended at the Louisville Slugger Museum, took a nice river walk, headed over to the Bluegrass Brewing Company and saw the Reds' AAA Affiliate Louisville Bats. 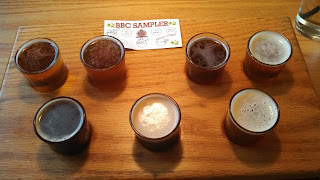 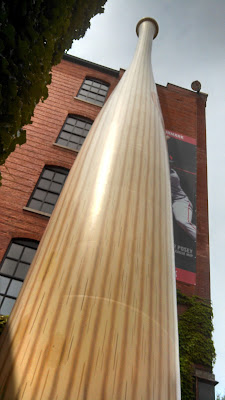 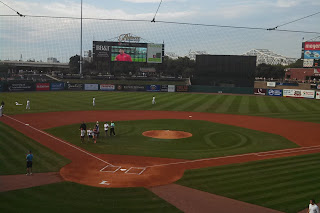 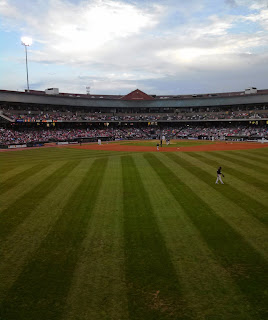 Interestingly or not, the Bats were the opponent when I saw the Yankees' AAA Affiliate, the Scranton/Wilkes-Barre RailRiders just two weeks ago when in Pennsylvania. I can't help noting that it's a handful of the AAA International League teams I've now seen. Should I try to touch them all? Hmmmm. It was a great game, ending on a walkoff hit in the bottom of the 10th. A walkoff is a nice way to kick off a fireworks show, which I had little interest in seeing, as I was exhausted. I did watch the entire game with a fun family from the area, though, so it was all good. And, that was my first sporting event in Kentucky, the 26th state in which I've seen a baseball or football game, so I really am more than halfway there, states-wise. I say again: Hmmmm.

When flying down from Detroit, I had captured this interesting view of the Queen City and stadium, from 27K feet. 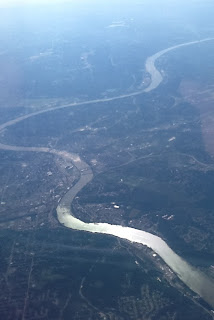 If my iPad had been on when I first saw this scene, I surely would have gotten a better shot, but by the time she fired up, we were moving past the city. Still, if you look closely, you can see the Great American Ball Park just above Paul Brown Stadium, both just to the left of the river about halfway up. The drive from Louisville to Cincinnati was easy, and an awesome view of its skyline comes into view shortly before crossing the bridge into town. They should have a turnout in the road to allow folks to take pictures.

After a walk along the riverfront--the same Ohio River I  had walked along in Louisville--and across the bridge back into Kentucky and then back, I visited the Moerlein Lager Brewery. They had some tasty brews there, although I did have to question why the flight I was presented had the IPA and Pale Ale samples before two lagers, including a Helles. How gauche. I spoke to a few people there for a bit. As in Louisville yesterday, my mentioning being from New York promptly led to being asked my thoughts on Arod.  On the way out, I noticed the floor marker of the location of first base of the old Riverfront Stadium. 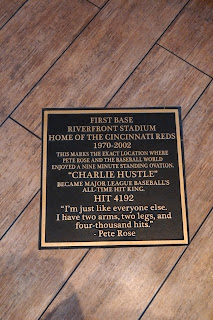 I thought that was pretty cool. After that, I paid a considerably more somber visit to the Underground Railroad Museum. Simply put, I'm glad I did as it is a fantastic exhibit.

I headed back to the hotel, gassed up this phone, and headed back to the ballpark. The weather here is fine. It looked chancy earlier, but the sky has brightened considerably since I pulled into town. The ballpark is rather full. Lots and lots of red. Yeah, predominantly Reds fans, but there are no shortage of Cards fans, whom I have come to learn travel quite well with their team. I've noticed this in Atlanta, Houston and now here. Me? Yeah, the not-so-spanking new team-neutral MLB logo. I'm wearing the black one for this night game, and I'm saving the heat-reflective white one for the day game tomorrow. 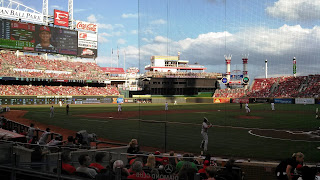 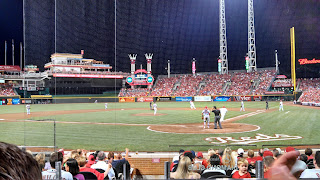 They seem to have some nice looking food and craft beer options, to which I'll avail myself shortly. It's time to enjoy the game..
ballparks
Location: Great American Ball Park, 100 Joe Nuxhall Way, Cincinnati