November 05, 2012
The day before Sandy hit, I did a huge cleanup outside. I moved something like 30 wheelbarrow loads of partially shredded leaves. I passed on all the 1:00 football games and just kept working. My neighbor was out there doing the same cleanup. We knew it could all be for naught, as we had no idea of what was in store. Downed trees seemed quite likely.

Well, my mailbox and post were toppled. Other than that, I had a ridiculously small amount of yard cleanup to do. I gathered fallen twigs and branches throughout my yard into the pile shown here. That's it. I did lose power for 62 hours, and with that power loss went my heat and running water. The house had cooled to 54 degrees Thursday morning, before the electricity kicked in, with the furnace and well pump coming to immediate life.

Of course, many suffered great losses, my family included. Many, again, family included, lost their utilities for far longer than I did. It's truly depressing on one hand but rather reassuring on the other: first, so many seem to be doing what they can to help their neighbors, family, and complete strangers; and, second, those most directly impacted seem to be coping as best they can.

That pile of sticks will take about two minutes to move out of sight. I'm in no hurry, preferring to leave it there as a reminder of how lucky I am. 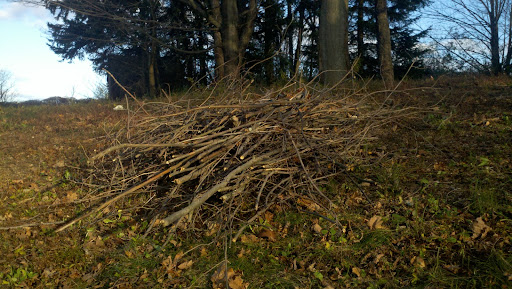