This is my third new NFL venue this year, and quite likely the last. When the schedule comes out each year, there are the two-for-one MLB/NFL weekends I try to set up for September, the two-NFL-games-in-one-weekend craziness I likewise try to scheme, but there is also that one team or venue I always seem to have in my sights as the one I must see each autumn.

That team this year was the Chiefs. For the past couple of years, I've looked at the schedule to see if I could get to Chiefs and Broncos games the same weekend, but there have been no such alignments of a Sunday game for one and an MNF game for the other with the road trip in between. This being the 50th anniversary of the Chiefs, however, had me ID them as the team to see this year. A bye week for the Giants opened this weekend a bit wider. Dirt cheap airfare clinched this for me.

So, this makes 24 teams. Not bad. Not bad at all. I'm 3/4 of the way there now, and I feel fortunate saying that. As I'm west of the Mississippi again, it struck me that I don't have a lot of western teams left (thank you, business travel). In fact, of the eight remaining teams, four are east of the Mississippi and four are west of it. That will make knocking off the balance of stadiums somewhat easier. I also note for symmetry that it's four teams in each conference that remain.

Now, the Chiefs are not exactly the best team in the league this year. That's fine, but it does remove some of the luster from things. Then there was that All Star game incident with the KC crowd abusing Robinson Cano. Again, that took away a bit of my enthusiasm for the game. Then there is the fact that it is rather late in the football season and northeast ski areas are opening this weekend--who would have thought that after last season? Finally, of course, there is the looming pall cast by Sandy. Indeed, traveling at this time has stirred some guilt. But the trip was planned months ago and is mostly paid for already, so I decided to go.

A tough day of travel yesterday knocked out the time in downtown I had planned. A tight flight schedule this evening has already further diminished my enthusiasm, as I'll be watching the clock late in the game. However, the next few hours are about football, and that's great.

It was interesting standing outside the stadium before the game, looking at the ballpark, effectively from the same spot I stood 21 years ago, during my only other trip to the area. At 40, it doesn't look that old at all, courtesy of some nice renovations.

Anyway, it's great football weather--way better than what I encountered in Phoenix--and I'd like to see the home team exact some revenge on the Bengals for what they did to Big Blue last week. So, donning the team neutral gear (of course), I say let's go! 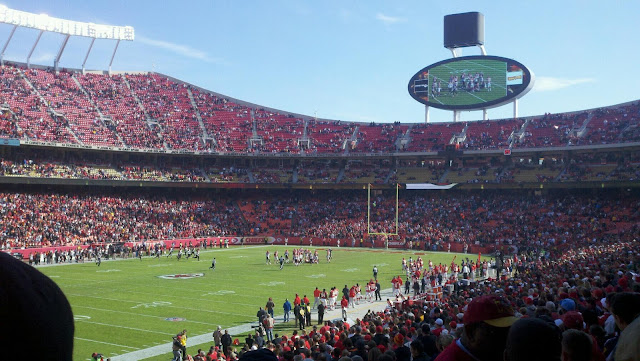