August 13, 2012
In my last entry, I excused my lack of posts by virtue of a broken wrist. Here, I will explain how I broke it. First, go back and reread one of the early posts on this blog. You'll see that I was/am very interested in the whole cross county ski thing. I like watching the pros do it, but I especially like firing my poles at the snow while pushing off on a ski, and repeating that motion until my arms, shoulders and legs ache so good.

The thing is, cross-country ski seasons are shorter than downhill ski seasons, and so my chances to do it are limited to a few days a year. It is such a great workout, though, that I've looked for ways to replicate the experience throughout the year. I've owned a NordicTrack for a good 10 years now, and less than half that time has it served as a coat rack. It's a great cardio workout, but it's not a true replacement of the XC experience. Late this spring, I began reading about roller skiing, and found a place in Norwich VT that rented and sold them. So, in early June, I got a package in the mail with this: 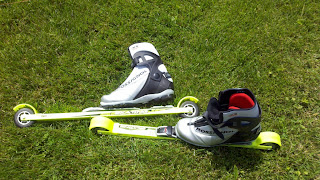 And with this, I was in business. I used my XC poles with these rented roller skis, and got to work. I took total advantage of the many miles of the Dutchess Rail Trail, finding nice, paved, level, and isolated sections to gain comfort on these crazy things. Early on, I had a bit of a problem with my right ankle, which may have stemmed from being out of shape, but that corrected itself over the next few weeks. At the end of my rental period, I had the option of returning them and being grateful for the experience, or taking the plunge. I took the plunge head first, but got a slightly souped up pair: 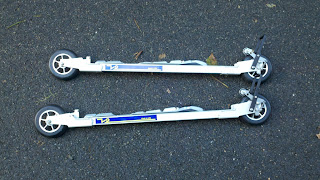 Yeah, these were better. They had speed reducers, to control downhill speeds, which meant I could work on inclines. Plus, I got a pair of asphalt poles, and some stiffer boots. Late June, I figured I was going to be in great shape by the end of summer, and then I'd be thoroughly ready for a great ski season by keeping at this throughout the fall. Then came the fall.

See, I didn't fall once during the rental period. Not once. My first day on the ones I bought felt really good, and the second day felt awesome. I finished up a nice workout, stretched upward, spotted my turnoff from the trail, and made the Cardinal sin of leaning too far back--it's a mistake on any ski, but these things are especially unforgiving. Anyway, one of my roller skis shot forward, and I fell straight down somewhere between, I don't know, maybe 1 and 2 MPH. My first reaction was frustration, and my second was embarrassment (did anybody see me?). Then, I tried to push myself up with my hand and stand up. That's when I felt the pain, and knew that I had a problem.

From my crumpled, seated position, I used my left hand to remove the roller skis, and headed back to the car. I removed as much safety gear with my left hand as I could (I was wearing a helmet, elbow pads, gloves, and knee pads--I passed on the wrist guards). A stranger saw me and helped me get the safety gear off my left arm, and urged me to do what I feared was necessary--seek medical help immediately. Thankfully, there was a walk-in medical center a mile from the trailhead.

Here's what their X rays showed: 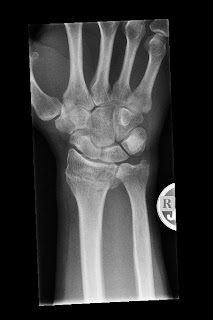 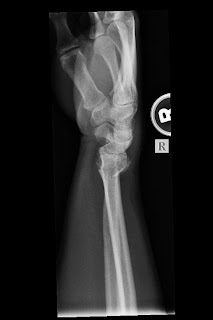 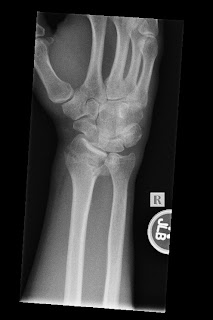 That's three distal radius fractures for those of you counting at home. My arm was immobilized, and the pain was surprisingly manageable, even without meds at that point. I was instructed to see an Orthopedist the next day, and did. There, I was given a shot to ease the pain, and then the bone doc promptly squished the fragments into position as best he could. Sounds painful? Well, yeah, this hurt like hell. But, that pain mostly dissipated quickly. I was put in a cast and advised that surgery would be needed, and received these X rays: 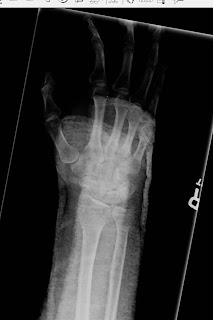 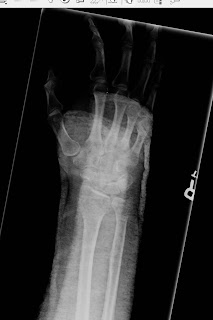 The bone looks a bit more aligned and together, eh? Well, it ain't good enough. No, five days later, under the knife I went, and came out looking like this: 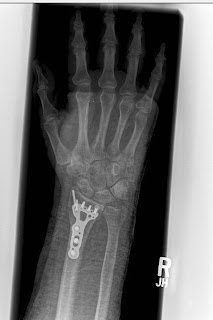 Chic, eh? Pretty fancy metal, if I don't say so myself. Still, I was in a soft, removable cast just days after surgery. Having the ends of my fingers available fortunately meant little disruption to work. Anyway, I've been doing physical therapy for a month, and got these final X rays about 10 days ago: 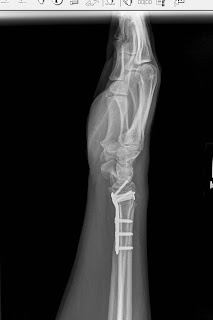 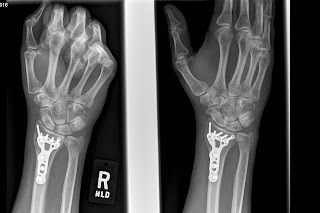 Yeah, if you look closely, it's easy to see that the screws had to go into my arm from both sides. It's my first broken bone, and I wanted to make sure there was no mistake about it. The doc did say the bones are basically healed, tho, and that I could resume more strenuous activity, which certainly was encouraging.

So, will I get on the roller skis again? I'm asked that a lot, but honesty don't know. I had the first urges to do it yesterday morning, but they were fleeting. There's no doubt that I will put on the downhill skis first chance I get, and I don't expect to hesitate at XC skiing when that opportunity comes up. Roller skiing on asphalt again? I just don't know...

Finally, I must say that I am quite grateful for the many kind words and deeds of family and friends as I've pushed through this ordeal.
Roller skiing wrist