Was it just a dream?

November 30, 2011
As I noted back in September, I look forward to autumn big time. I look forward to this season, and the promise of what follows, with skiing a huge part of that. Skiing requires snow, and so the first snowfall is something I await rather eagerly each year. It doesn't need to be a blizzard, no, just some flakes, flurries, and really just a little white on the grass will do. And, to make me really happy, let there be some white upon the trees, especially those bearing leaves that have changed colors. It's called "snowliage" by some, a term I would like to see in the dictionary one day. Snow + fall foliage = snowliage. Simple and beautiful.

Most years I actually don't get to see any snowliage, as, despite my Hudson Valley locale, the first snow usually doesn't strike until the trees are bare.

That was not the case last month. It was Thursday, October 27 when some snow started to fall. The trees in my yard were well past peak at that point, but there were still a few with leaves. Following are a few pictures I shot with my G10 that evening. 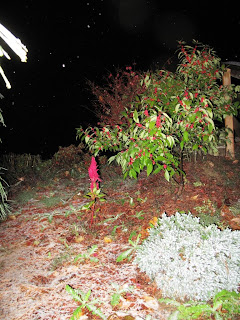 I kind of wished I had pulled the weeds and spruced up the mulch before taking this picture (of course, I did that a week or two later), but I just loved the look of the snow on these shrubs. 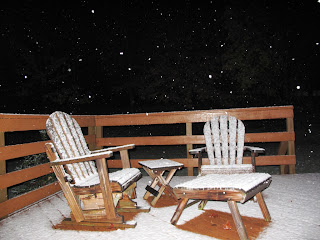 Might be a bit too wet and chilly to enjoy a beverage on the deck this evening... 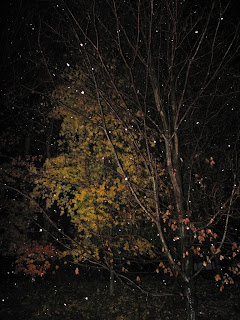 Snowliage, snowliage! Why couldn't the snow have fallen during daylight? I feared this might be my only snowliage op of the season, though, and took it. 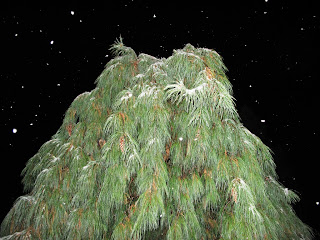 Snow never looks out of place atop my weeping white pine... 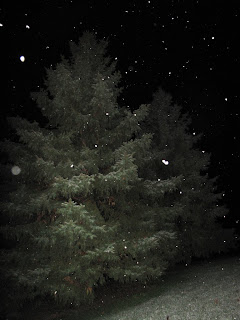 ...nor falling around my Colorado spruces... 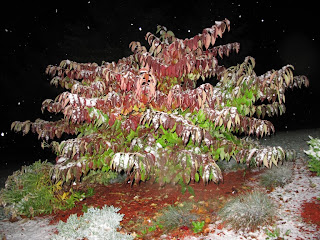 ...and I especially liked the way the snow decorated my viburnum, with its leaves nicely changed.

So, there I had it, right? A first snowfall, some adequate snowliage pictures, etc--all amounting to a nice tease for the coming ski season. It was mostly gone the next morning, however, as milder temps melted it away. So long, snow. I knew that it wouldn't be long now. Yep, I'd be strapping those skis on in no time.

That morning, though, I turned my attention back to another fall favorite: football, and made plans to hit the Giants game that Sunday with a friend, which promised to be a nice day. No sooner had I secured the tickets, however, when I took note of the weather predicted for the day before the game and following the present one. As much as 6" expected? Nah, that had to be a worst-case scenario for some of the higher elevations to my north, right? Later, the estimates doubled.

Saturday morning, I scrambled around the yard, picking up branches, leaves, etc, and doing what yard cleanup I could get in before the promised snow came. 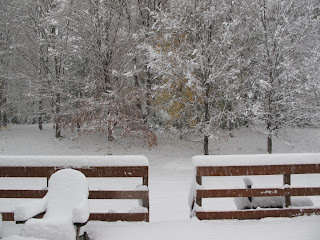 It was clear early on that this was a more serious storm than the one two days earlier. 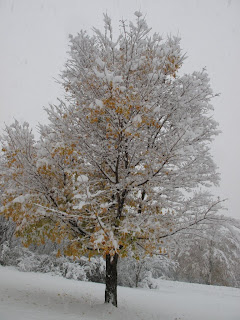 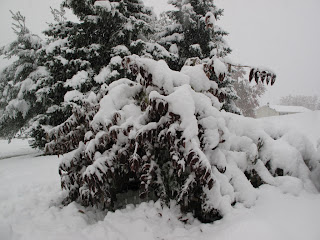 Here's the viburnum, pinned down from the weight of the snow. 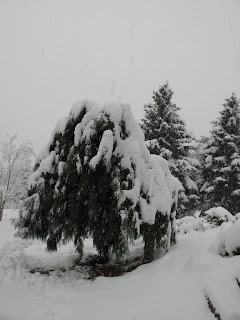 And here's the weeping white pine, rather unfazed by the early snow. 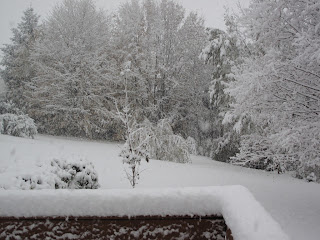 Toward the back of this picture is my river birch, which I thought was a goner, with all three trunks bent down in different directions from the weight of the snow.

It was an amazing evening. I could hear branches snapping--many breaking off altogether and others safely springing back into position when accumulated snow was blown off. I shot this picture with my phone late that evening: 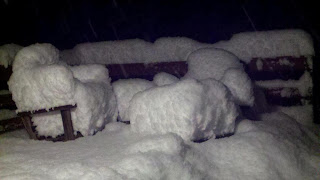 It was easily over a foot. The next morning, the snow had stopped, the temps were above freezing, and I had those tickets to the game. So, in what was really a wild ride, with snow and ice falling from branches, downed trees littered all over the road, and emergency vehicles everywhere clearing the damage, I made the drive down to White Plains to catch the train, since all stops north of there were canceled thanks to the storm damage. We got to the stadium where there was nothing resembling the destruction up north. Big Blue squeaked one out, we had a good time, and that was all good.

Now Monday morning, Halloween in fact, I finally got outside to get a sense of the damage. I lost one tree, and maybe two--the verdict is still out on my weeping willow. A large, nondescript shrub was lost as well, as were a number of large limbs. The river birch, though, made it: 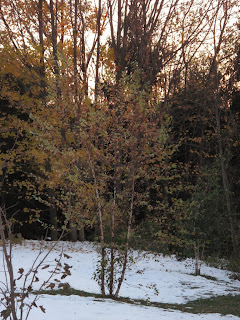 Still it was Halloween, and I couldn't resist throwing on the skis for one quick run down the yard. I mean, I've never had the skis on in October. Now, bear in mind that it was my first time putting on skis in seven months, that I was using a single pole to push through two flat areas, and that I was trying to hold my phone securely and steadily with the other hand...


Ok, it could have been worse. And I will get better with filming my skiing, don't you worry about that. Anyway, that was a month ago, and I haven't seen any snow at all since. In fact, it's been rather balmy for the past few weeks, and I even mowed the damn lawn this past weekend. So, I do wonder if all of this transpired. Or, was it just a dream. It seems so real to me.