March 06, 2011
I took my latest trip to Stowe during President's week, meeting up with friend Mike and his family. I love it up there: the mountain, the restaurants, the pubs, the village—all of it.

For the last decade, Stowe has been the centerpiece of my Prez week trip, but each year I try to visit at least one surrounding ski area too. This year I opted for Sugarloaf, in Maine, a mere 5 hours to the east on Route 2.

Now, I have a certain fondness for the Loaf too, which I chronicled last year. When I was into cross-country skiing in the 90s, I found myself wandering farther and farther north to the better XC areas, and it was at the Sugarloaf XC ski center that I learned how to use skate skis. The impressive sight of that mountain, though, made me want to try alpine skiing again (and some XC struggles going downhill ended up forcing my hand). As a neophyte skier, Mike and I went there in 1999, but I hadn’t been back since. When I learned that a cousin would be living in Maine for a year, I had the added incentive I needed to do the extra driving.

After a fantastic afternoon in Brunswick, I made the drive towards Sugarloaf. A cold but beautiful day, I was not let down at all. While the sight of the mountain from the roadway is truly impressive, the one from the steps leading up to the base area isn’t bad either. 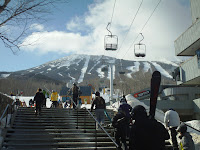 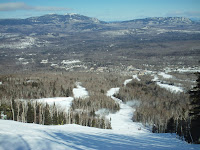 I only had one day here, so didn’t spend much time taking pictures, and really only thought one other was post-worthy. It was snapped from Tote Road, which I recalled being listed in a ski magazine as one of the five most scenic trails in the northeast. Sure, it was nice enough, but my best run of the day was on Hayburner. And, I absolutely would have taken a picture from this trail, had I known that I would be on Stowe's Hayride a day later. I felt very fortunate to be able to hit these two great trails on consecutive days.

After one day of trying to cover as much of the Loaf as practical, the long but mostly pleasant (i.e., scenic) drive west ensued. I was in the Stowe village for less than an hour when the first pints of Switchback were poured. With the massive selection of beer from local brewers in this area, I think Switchback is my favorite. Anyway, take note of the Switchback trail and Switchback Ale. One was served cold and icy and was rather tougher to get down than expected; the other was not quite so cold and goes down easy. 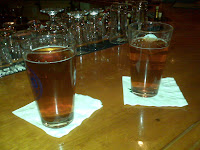 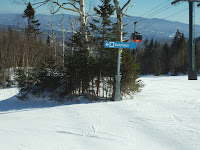 I also took some shots on Mt. Mansfield. No picture I took shows it well, but you can make out New Hampshire’s Mt. Washington in two of them. (And, yes, I did hit those four trails.) 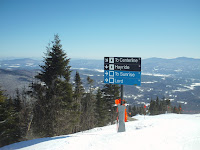 Hayride, though, was my favorite this time around. The sign in the picture is prominent, but to the left of it, you might imagine its “waterfall pitch”. 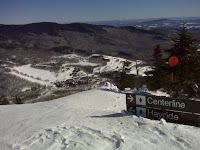 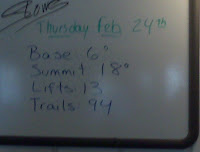 As in Sugarloaf, the weather cooperated nicely. Well, so long as the cold doesn’t bother you: Village temperatures were subzero overnight, warmed to single digits in the morning, and then into the teens during the day. That’s perfectly comfortable ski weather when the sun is out and the wind still. I don’t remember ever seeing the sky so blue up there. In fact, the beautiful backdrop seemed like it might enable a self-portrait profile picture. 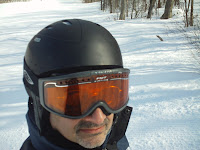 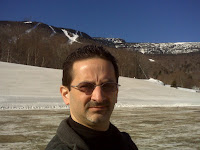 No dice (although I kind of like the one without the helmet—had I not captured so much of the empty parking lot, I might have used that one. Oh well…)

I mentioned the appeal of all the good eateries up here, right? First, there are the waffles (so worth the 15-minute wait). And, there is popcorn at the Shed—nobody got sick from it! 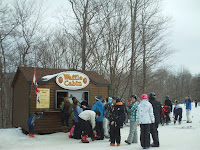 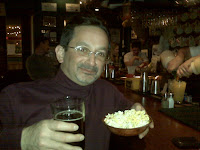 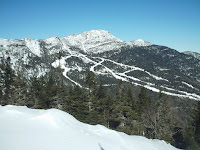 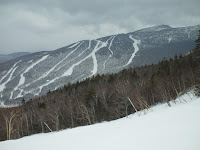 But, it is mostly about the mountain, and the trails on Mansfield look enticing from the top of its own quad (left) or from trails off the Sensation quad on Spruce Peak (right). Now the fourth day of the trip, I wasn’t sure if this would be my last day of skiing, so I tried to get in as much as I could. The skies turned cloudy and the winds picked up, but the temperatures had warmed through the 20s. The scenery still struck me as awesome. Different, but awesome.

Then there was the last day on the slopes, which was the day I had planned to drive home. I realized, though, that I needed to stay an extra day: I had no intentions of driving in a blizzard, especially one in which I could be skiing! But, my legs were worn out. This was the second day I skied with Mike and the family (and their fourth straight). I knew I was pretty much done by lunch, so I had a nice one in the Octagon Café, and then hoped my legs had enough for one last cruise to the base. It was ugly but without incident. 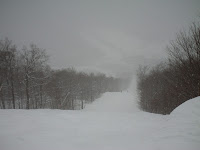 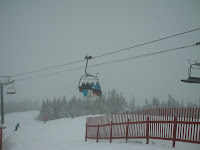 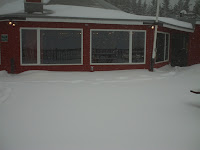 After that, I walked around for a bit to play with my new wide-angle lens…

Finally, apologies for the lack of action shots. One of these trips...
skiing Stowe Sugarloaf travel