With one swing of a pick axe

October 27, 2010
Well, a few people have been asking me where the foliage pictures are, so I thought I would share some fall shots from the yard, taken before the leaves really started covering it. First, though, here is proof of the old adage that you can't turn a sow's ear into a silk purse. 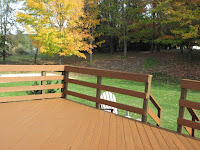 I finished restaining the deck a few weeks ago. I'm glad that's done as it looks considerably better than it did a month ago. But, I won't be happy until I have a new one. Or at least do something about the rails. Why it was built with four rails on one side and three on the others has been bothering me for some time. Further, those four rails are all 2X6s while the other sides were made from 1X6s, suggesting that the last side was probably made from leftover wood. Still, if I take the picture emphasizing the nicely turned maple a bit better, the imperfections on the deck don't quite stand out so much... 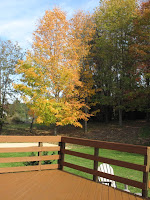 Here's one of my burning bushes. Travel prevented me from seeing them in their deep red state. 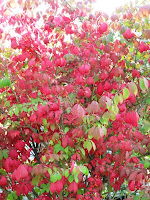 Here is my largest maple, just starting to turn. It too probably peaked while I was away. 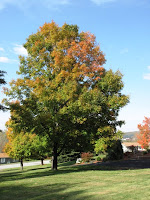 In a family-history connected post I mentioned that maple and another, concerned about portions of them that needed to fill out now that a maple squeezed between them was removed. They're getting there, kind of...well, the bigger one is anyway...

Ok, the spruce looks this way all year long, but I like this shot across the yard: 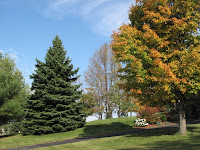 Zooming in on these last two shots, here is my viburnum mariesii. I thought the foliage was salmon, but I've never been good with colors. I just know I like it. 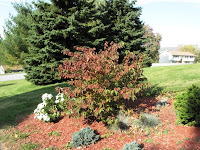 What color would you call this? 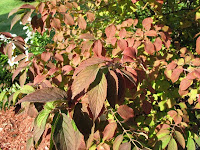 In front of the viburnum are some Montauk Daisies. 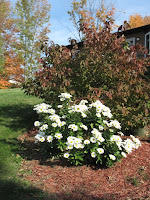 I was given a few of these not long after I moved in. Deer or rabbits did a number on one of the plants, but I have two others that have been left alone and are doing great. They fill out in a nice circuclar shape without much care at all. In November last year, though, I saw that one stem was growing a good foot away from the rest of the plant. I was about to simply clip it off, when I noticed that it was separate from the rest of the plant. So, I grabbed my nearby pick axe, and aimed to cut through to the roots with the flat end, hoping to break the offshoot away cleanly. I took one deft swing, hit my mark, and lifted the plant with some roots right on that flat end of the axe. Figuring it was 50/50 that something would grow from this (it was past the growing season up here), I threw it in the cold ground with some fertilizer.

This past spring, a dried-up remnant of what I had planted was all that remained, but I left it alone. A few weeks later, however, some green leaves started emerging. Now I have this, all from one swing with my trusty pick axe: 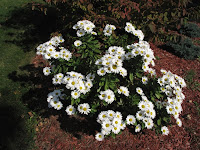 These daisies, though, are the last thing to bloom here. The next picture I post from the yard will probably have snow...
foliage landscaping montauk daisies trees viburnum mariesii yardwork