September 24, 2010
Ouch…Thinking about that beating the Giants received this past Sunday still hurts. Before the bloodbath, I had posted about my first two football road trips, and now I’ve decided to continue with my first visits to other stadiums. If the team I am visiting is not playing the Giants, I usually simply root for the home team, but I’m more interested in seeing a good game. 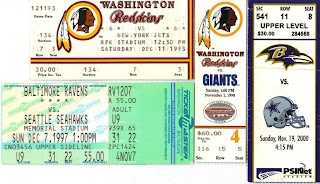 On a cold and snowy December day in 1993, my Jets season-ticket-holding brother-in-law, one of his good friends, and I made the drive to DC for a Jets–Redskins game at RFK stadium. In the worst game I ever saw in person, the Jets won by a field goal, which happened to be the only scoring in the game. On an earlier FG attempt, the Jets’ holder was hit in the head with the snapped ball—no doubt the funniest play I’ve ever witnessed. Yeah, the day was long, the weather and game equally dismal, but we look back on the day fondly.

Four years later, one of my very good friends—a diehard Seahawks fan—persuaded a band of us to make the trip to Baltimore to see his team face off against the Ravens, who were still playing in Memorial Stadium. (He lives in New York, but roots for…the Seahawks. I know.) Anyway, it was another cold December game, but there was no snow this time. My friend saw his team lose a high-scoring game by a touchdown on an otherwise fun weekend.

In 1998, I returned to DC, this time to see the Redskins play the Giants. I bought my ticket from a scalper, found my way to a really good seat in the new stadium, and was greeted by the fan in the adjacent seat who had sold his ticket. When he learned that I was a Giants fan, he said that he would have ripped it up rather than have it sold to a Giants fan. A couple rows behind us were a few Giants fans still on a high from the World Series the Yankees had just won, and plenty of others were nearby. This made me comfortable in openly and loudly rooting for my team, as we thought nothing of reaching over Skins fans to celebrate scores by Big Blue. Really, it was a civil and friendly crowd. As when I saw them at Soldier Field, though, the Giants played a seesaw game that they ultimately lost. So, my team was now 1-2 when I saw them on the road.

My next football road games were in 2000, with the first in Baltimore again. The Ravens had a new stadium, and a few of us saw them beat up on the Cowboys, which is just a good thing in any stadium. 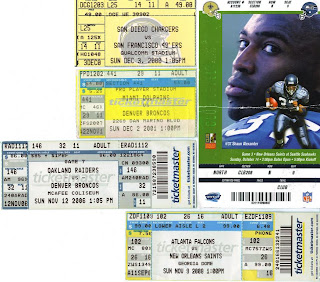 Two weeks later, I hit one far from the Mid-Atlantic area: Business travel took me to southern California, so I added a couple days in San Diego, which was a city I always wanted to see. Unfortunately, the Chargers were clobbered by the 49ers. Like some of the games above, it was December. Unlike those games, I wore shorts.

Actually, it was business travel that enabled visits to a number of stadiums:

It got me to a Dolphins game in 2001—a good game won by the Dolphins in comeback fashion, with an exuberant crowd chanting J-E-T-S taunts, who the Fish weren’t even playing. Again, I was able to wear shorts to a December football game: I could see getting used to this...

It got me to a Raiders game in 2006—I had one of those bench seats that get rolled out when the stadium is put into a football configuration—one foot was on cement and the other on metal—very weird. Not surprisingly, the Raiders lost, but a path crossing with their cheerleaders is separate post material.

It got me to a Seahawks game in 2007—to the considerable envy of the above-mentioned Seahawk friend (who was spared the ignominy of seeing them lose), in a game delayed for awhile because an overhead camera sank to the field. It was a very expensive ticket purchased at the concierge desk of the hotel, but I figured that this is not something I would do more than once, per team or season…

It got me to a Falcons game in 2008—I had consecutive business meetings in two different cities with the Sunday free, and so, in perhaps my most clever booking move ever, stretched a connection in Atlanta to something like 7 hours. This gave me plenty of time to hit the Georgiadome and see a Falcons win on my layover.

The other four games I attended were part of personal travel…

Back in 2002, Louisiana was the last of the Continental states I had not visited, so I planned a trip to New Orleans, the Gulf Coast of Mississippi, and a tour of the Civil War site in Vicksburg. The New Orleans part of the trip was scheduled to allow attending a Saints game. After having seen the 49ers beat up on the Chargers the year before, I saw them play perhaps the most exciting game I have attended, a back and forth shootout won by the Saints, 35–27. The whole experience was awesome, as I remember walking into the Superdome, and seeing thousands of Bloody Marys as the beverage of choice for the 12:00 game. After the game, it was just great to walk with the reveling crowd from the stadium back to Bourbon Street.

In 2003, I went to my favorite stadium. I knew it would be my favorite before I got there, and it didn’t let me down. On a perfectly warm October day, my brother and I flew to Green Bay, and went to Lambeau Field. Another exciting game, the Packers lost a 40–34 shootout in overtime to the Chiefs.

Last year, I hit two more. In yet another close game, I saw the Patriots beat the Ravens in October. Given the close contest, the mellow crowd surprised me. Warned of snarling traffic, I arrived early, but parked close to the stadium, and had no trouble getting in or out of the lot. Oh yeah, I took considerable pleasure at spotting a banner touting the 18-1 season the Pats enjoyed in 2007, because most every fan knows what the “1” signifies!

In November, I spent a weekend in Nashville, and saw the Titans beat Buffalo in a lively environment. I had watched the Predators play the Canadiens the night before, but had arrived too late for a Tennessee/Kentucky college football match-up. Still, a large number of fans for the three opponents turned the Music City into Sports Central.

Next on the list? Buffalo is one possibility. But, I have no real “must see” stadiums in mind. Do you?
football road trip stadiums travel