August 20, 2010
Seeing moose on my first trip to northern New Hampshire didn’t make me think “ok, been there, done that”. No, I wanted to go back. The whole trip was my speed—the camping, the hiking, the fresh air, the scenery in general, the practicing of outdoor photography skills, and, of course those magnificent animals. Aside from the moose, the other things mentioned were doable nearby.

What triggered my fascination with moose, though, escapes me. After seeing so much wildlife on trips through the Rockies, I suppose the bull moose did become something of a checklist item. A common misconception pegged me a “Northern Exposure” fan, but my only Hollywood association with moose is that great scene from “Shoot to Kill”, when Sidney Poitier’s city-dwelling character opens his cabin door and finds one at the entrance. Outdoor and wildlife photography magazines and books certainly featured captivating pictures of these beasts, and I think were prime motivators in that I was eager to replicate some of their pictures. However it happened, dust-collecting moose figurines started popping up in the house and made me wonder what it might be like to actually see one of them. The treks north soon followed.

The real hope when moose watching is to spot a bull with large antlers. Such sightings are rare for me, however, as I’ve probably seen a dozen cows for every bull. A complicating factor in this is the timing: The best time to see a fully antlered bull is in September or October, which in turn is when Vermont, New Hampshire, and Maine rotate their brief moose hunting seasons. While aware of the schedules, and honoring how close to the roadway I must stay as hunters must maintain a greater distance from it, I have been startled by gun shots.

With that precaution duly noted, all that is needed is patience, and the moose will show. Believe it or not, many people come from great distances to troll along Moose Alley. And, everyone works together, letting each other know where a successful spotting occurs. If one car stops along the roadway, other cars soon follow, expecting that a moose is nearby.

On one such trip 15 or so years ago, I had given up on Moose Alley for the day and was heading south toward my campground. Not long into the drive, I spotted some white birch trees in peak foliage catching the setting sunlight in a beautiful way. Having seen stunning pictures of these trees in photography magazines, I knew this was my chance to capture such an image myself. So, I pulled off the road to set up my camera and take some pictures. A pretty young woman from Montreal pulled off the road behind me, though, and got out of her car with her Nikon, because she thought that I had spotted a moose. Hmmm, a pretty young woman, with a nice camera of her own, on a chilly evening in remote New Hampshire—I was impressed. Her French accent sweet, we talked for a bit, and, as luck would have it, the mother of all bull moose snuck right across the road behind us. It was huge, yet moved silently until its antlers snapped some branches when meandering along the woods right near the roadway. I ripped the camera off the tripod, and tried to get a few pictures in the quickly darkening evening. Then it vanished into the woods. 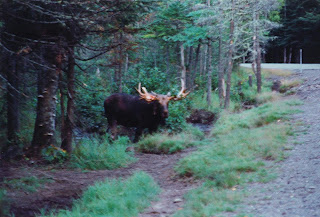 We both rushed toward where it went into the trees, and were stunned, because there was no sign of the moose and no visible entrance into the woods. It would have been difficult for a much smaller person to make their way into the densely wooded terrain, but the moose effortlessly disappeared into it. We waited for a while, puzzled both at how we missed it crossing the road and how it could have gotten into the trees, and hoping that it would come out, but it didn’t. 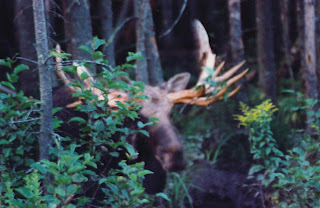 So, I didn't get the pictures of the birch trees, and I only managed some pictures like these that suffer from camera shake. Still, we talked for a while, but, as luck would have it, I was heading south and she was heading north, back across that dreaded Canadian border.