August 05, 2010
A weekend visit with my father had me return with another armful of envelopes loaded with an amazing pictorial history of his mom’s side of the family. I’ve been scrutinizing such pictures by the hundreds these past few months. With the previous ones, it was just nice to see and share old family pictures that I had not seen in years, not since really diving into family history. I could tell from those, however, that there was a gap: they mostly skipped from the late 1930s right to 1950. The pictures I took home this weekend filled in that gap. More surprising, though, the number of pictures I had predating the 1930s was now greatly increased.

Included are a few of my grandmother as a teenager (younger than I ever recall seeing her), a bunch more of her parents, and many, many more of all of her brothers and sisters. Except for one.

I probably had only met my Aunt Gertrude a few times before 2000. She lived in the southern end of New Jersey, and visits between the families just didn’t occur. I remember the family receiving a Christmas card from hers, and I am sure my dad and grandmother spoke of her, but I must not have really been listening, as I could not picture her or recall anything about her.

My interest in family history corrected that.

When digging into your roots, there is only so much that can be garnered from census records, birth certificates, etc. If creating portraits of your forebears is the goal, if you want to know their stories, you either need to witness it, hear it from them, or know people who knew them. My father and grandmother had been remarkable at preserving the family history, and a few others were equally helpful in supplementing it. For an additional perspective I reached out to Aunt Gertrude.

I should note that my aunt suffered from CMT. This neurological affliction also struck her daughter and others in the family. Unable to write much without considerable discomfort, she and her daughter still sent me a rather lengthy written response when I first wrote her about 10 years ago. After a few phone conversations, I made my first trip to see her in the summer of 2000. I picked up her younger sister who lives near where I am now in the Hudson Valley, and we made a loop visiting family in Pennsylvania and New Jersey, stopping to spend a day with Aunt Gertie down in Vineland.

Of course, she and her sister were interested in catching up, but Aunt Gertie also seized the opportunity to get to know me. She filled my head with stories about my grandmother, who had died three years earlier (and let me just say, when reflecting on someone, the perspective of a grandson and a sibling are much different…); the relationships of the siblings; the conditions in which they grew up; and, perhaps sweetest of all, she told me stories about my grandfather that caught me off guard. I remember my grandfather decently well, but he died when I was young. It was wonderful to hear his sister-in-law, someone I really didn’t know, talk about their relationship and build upon the image I had of a great man.

Here are some other random things I learned from her:
-She shared the tiny bit she could recall about her maternal grandfather, the first in her family to come to the United States, and someone I might have thought to discuss with my grandmother when she was alive.
-Her father never spoke about his parents or heritage. For as much as I wanted to know about him and his origins, it seemed that I had not missed out on an opportunity to ask my grandmother, as this information was probably never volunteered to her.
-I knew from family records that my grandfather worked at the small NYC restaurant chain Foltis-Fischer during the Depression, but she explained that she and two of her sisters and several of their spouses all did too. With the family originally from coal-mining country in Pennsylvania, she provided some background as to how so much of the family ended up on Long Island.
-During the Prohibition, the family made wine for their consumption, and even stored it in a hidden part of the basement (!).
-She hated the name “Gertrude”.

All together, she painted a clearer picture of the family that made sense of a lot of the bare facts I had acquired when doing my research; she told me things I don’t believe my grandmother would have; and because she was nine years younger and stayed at home awhile longer, she provided some details about my great grandfather’s later years that my grandmother (married and 180 miles away) would not have known.

She was about 85 when I visited. Her mind was sharp, and she could recall details about her youth that impressed me. She also showed a surprising awareness of pop culture and a sharp sense of humor. Her health, though, was getting to her.

I saw her only one other time, while she spent some time in a nursing home in 2002. I hadn’t scheduled the visit, but when I entered her room, it only took her about two seconds to recognize me and call out “Tommy?” Only there for company, I didn’t want to pester her with family questions, but she volunteered it, and we talked for well over an hour. In addition to the two visits, we spoke on the phone every few months. I absolutely regret not making an effort to know her sooner, but I am grateful that I did at all. She died six years ago.

Finally, Aunt Gertie explained that she hated having her picture taken. She didn’t keep any of herself from when she was younger, and told me at one point later in life she had asked my grandmother for some. She said that my grandmother had these pictures glued into an album and had to tear them out, and so the only ones she had were rather ragged. 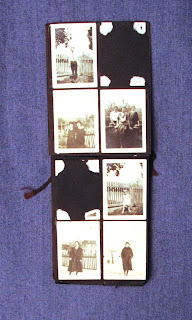 When going through the envelopes of pictures that I just brought home, I see an album with lots of gaps in it where pictures were indeed torn out. All of the siblings are well represented, except for my dear Aunt Gertrude.
family history Gertrude old family pictures