July 26, 2010
More time than usual has transpired since my last post. Two new ones are written, but I don’t have the accompanying pictures ready and so am holding off on them. However, my friend Paul’s post inspired me to dig into my fairly massive 1990s travel tome, which is mostly unshared as I figure out what to do with it. Snipping bits out to post here is one thing I’ve considered…

By 1993, I had been to most of the U.S. National Parks along the Rockies at least once. These ventures out west afforded me the chance to see ample wildlife: bear, buffalo, mountain goats, bighorn sheep, etc. The one thing I was eager to see but hadn’t, though, was the largest of the North American even-toed ungulates--Alces alces, or, more simply, the moose. I don’t know when my fascination with moose started, but by this point in the early 90s I was determined to see one. Then a New York Times travel section article on a prime moose viewing area just outside of Pittsburg, New Hampshire, was handed to me. That’s not a typo; there is no “h” at the end of this Pittsburg. At 15 miles from the Canadian border, Pittsburg sits squarely on the 45th parallel, and is 4000 miles from the North Pole and 4000 miles from the Equator. The mileage from Long Island equates to 1/10 that distance, a drive for me which amounted to child’s play.

I made most of the drive after work one Friday evening that September, stopping in St. Johnsbury of Vermont’s Northeast Kingdom. The next morning, I started my drive on Rte. 2 East, passing a quaint country store named The Farmer’s Daughter that I’ve visited most every time I find myself in the region, whether moose watching or skiing. Regardless, I completed the drive to Pittsburg, located another hour east and then another hour north from St. Johnsbury. There is very little to Pittsburg: a hunting shop, a gas station, and not much else. I continued north through town on Rt. 3 to begin the official search for moose.

This stretch of highway is named “Moose Alley,” and is an important truck route for loggers bringing wood across the border from Quebec. To keep the road open in winter months, it is heavily salted, and that’s where the moose come in: They meander along the sides of the road to lick the salt that rain has washed off the roadway. Anyway, once through town, the terrain goes from rather nondescript to seriously wooded. A few landmarks flew by on the way out of town: campgrounds, an Arctic Cat snowmobile shop, a dam, and—most relevant to me—a pancake house. 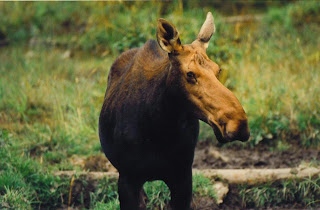 Once a few miles north of civilization, sure enough, a female moose came into view. Very exciting. I pulled the car off the road, set the camera up on a tripod, and watched her for a few minutes. I should note that my primary lens of choice was a not-terribly-fast 400mm/F5.6, but I was still able to capture a few decent shots. A few minutes later, I moved along and saw a mother and calf ambling into the woods. This was so cool. I proceeded up the short distance to the Canadian border and made a U-Turn and slowly headed back to town, hoping to spot more, perhaps even a bull. 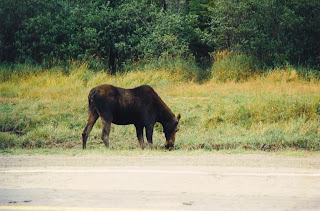 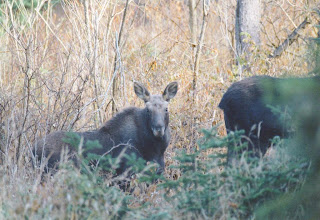 I repeated my slow drive to the Canadian border and turned back again. It was getting near midday, and I figured I wouldn’t see anything for the next few hours: moose are usually active in the early morning and late afternoon—they avoid the sun during the day, tending to rest in the densely wooded areas that offer more shade. Fortunately, the three Connecticut Lakes, which feed the Connecticut River, are nearby and offer hiking opportunities. As one might imagine, there were not many people around, just some trout fishermen, plenty of waterfowl and some nice vistas... 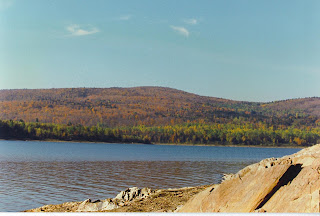 Later that afternoon, I resumed my search and spotted a few more moose. Again, photographing a male with full antlers was my real intention, but none were seen on this first trip to the region. Unsuccessful in that regard, I headed south to where I was staying for the night.

I drove through Pittsburg early the next morning, making another couple of laps along Moose Alley, and then returned to that pancake place I had noticed the previous day. I enjoyed a really awesome breakfast that morning, and then on every subsequent one to the region. Located on the left a mile or two north of town, a link to the restaurant would have been provided had I been able to find the name when searching just now.

And, I have certainly made additional trips up there. Given that I had some success at seeing moose on this first trip, I went at least once a year for the next three years. Each trip brought me moose spotting success and has left me with different memories—some quite pleasant, some less so. Details may follow in future posts.
moose Moose Alley photography Pittsburg NH travel