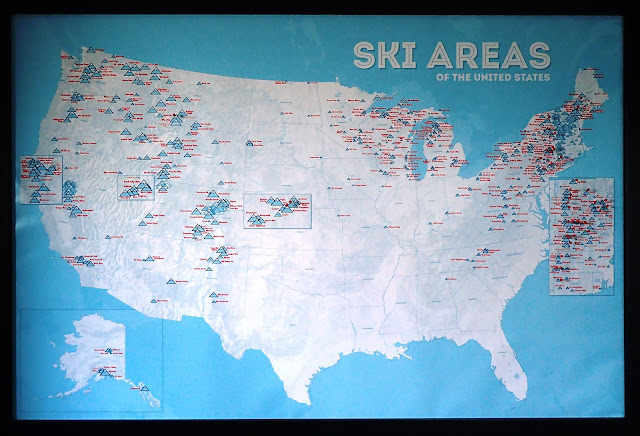 I must have used more paste when gluing my ski map to its cork base, because it is not sagging at all. After all, there are a mere 45 pins on it, the vast majority of which are on the upper right side. No, there are few pins in the Cascades, Rockies and Sierra Mountains, and not enough to sufficiently prevent the sagging, lumping and other visible eyesores afflicting my National Park map discussed in my previous post.

The problem with this one is the pin color selection. Clearly red pins against a red mountain outline was not the most prudent decision. Then again, nor would have white, black or blue pins been any better. Green and yellow pins might stand out more, but they just don't seem like ski colors, do they? Anyway, I may buy some bigger pins next time I'm in a crafts store. I'll also try to get a clearer picture, but, for now, here is a tabular representation of my ski resort visits; as with my last map, resorts are sorted alphabetically by state, and here followed by the month and year of the first trip:

So, the ski trips to Switzerland and Canada don't show on the map, and, the trips to Colorado and Montana require a bit of eye strain to discern on it. Likewise, I doubt pins added from upcoming trips to Wyoming and Utah will show any better.

Since hanging this map, I certainly have gained an appreciation of the vast number of ski places around the country. Some call to me (Telluride, Alyeska, Taos, Park City, Steamboat, Snowshoe, Le Massif, etc, etc), while others just make me hope they have fans who enjoy them.

It was six weeks ago where I totally randomly passed the two ski resorts in Ohio's Cuyahoga Valley National Park. And now they are calling me, as my eyes go straight to them when I glance at this map. They didn't appear terribly imposing, but nestled in a National Park? It was the last thing I was expecting to see when driving to the Visitor's Center. I almost pulled into one of their parking lots to take pictures. It was late November and they were hoping to fire up their snow guns that week. Had they a single run open, I surely would have bought a lift ticket, rented skis, and done a run or two in my jeans. The idea of skiing in a National Park and skiing in Ohio just really appealed to me for some reason. One of these years!

For now, though, my anticipation is about skiing on the door step of another National Park, at Jackson Hole Wyoming! And, yes, courtesy of my Mountain Collective pass, I will also get in two days at Alta in Utah. It should be a fun trip, and will bring me up to 12 states skied.

My one other ski goal this year is to firmly anchor the northeast section of the map, by hitting the last two ski areas in Vermont that I'm missing. If I don't get to do that this year, I will next year.

Of course, staying healthy, skiing strongly and especially enjoying time in the mountains are the real ski goals each winter.