And here I am in Raymond James Stadium!

Finally--two weekends deep in November and I'm seeing my first football game of the year. It's almost embarrassing. But, I don't create the schedule and this game was picked for good reason. You see, Big Blue is in town, along with a bunch of my closest Big Blue buddies. Just like last year in Jacksonville, we circled this date on the calendar when the schedule came out.

My day started with yet another stupid early flight, and once again I somehow woke up 2 minutes before my 4:00 am alarm, initially panicking since I thought I might have missed it. Though it was a nice crisp early morning with temps in the 30s, there was no snow in the yard like last year. The night sky created the beauty this time, with a sinking crescent moon being chased to the horizon by a bright Venus and Jupiter, coupled with some clearly visible Leonid meteor shower bursts that were actually a bit alarming in my pre-caffeinated drive down 684.

I didn't allow myself to get distracted, though, and arrived safely at LGA in ample time for my 7:15 flight. Plenty of other fans in Giants gear joined me at the gate. Big Blue surely would be well represented.

I arrived in Tampa in time for a late breakfast, opting for a recommended place near my hotel. I had packed lightly because it's just an overnight trip, but also because it is hot and humid, with temperatures now in the 80s: no jacket or long sleeves required. Changing to shorts was my first order of business. This is not football weather, especially for November. Some places out west have opened ski resorts, but warm weather in the east means no hopes of skiing for a few more weeks. 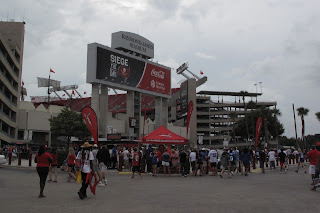 Before the game, I wasn't sure what to expect. I didn't expect the offense to repeat its six-TD effort (plus one on defense), and I certainly hoped the defense didn't yield seven more. I did hope, however, that the return of JPP would strengthen the defense big time. The gang discussed this all over our informal tailgate. Once inside the stadium, the next noteworthy occurrence was the pregame Veteran's Day tribute, which included veterans sky-diving into the stadium, a low flyover of military helicopters escorting a huge prop plane and Buzz Aldrin in the Bucs' iconic pirate ship. Great stuff!
All of the pregame hopes proved true. The Giants started by being intercepted on the first play of the game and yielding a FG. Then, the Giants got ahead and stayed ahead. Nothing spectacular, but they oddly felt in control most of the way and never surrendered the lead. JPP ensured that with some strong fourth quarter play. I'll take a conference road win any time.

As for my all-important stats, the Bucs become the 28th team I've seen play at home. I'm 7/8 of the way there! I have four teams and seven stadiums to go. Seeing the Bucs at home means I've knocked off the NFC south, and have seen all four teams of half of the eight NFL Divisions. Not bad...
One final bit of bemusement awaited me when opening my hotel curtains the next morning. I had dropped my bag off at the hotel after the late breakfast, and walked over to the tailgate party. Checking in to the hotel after the game and well after dark, I had no idea that a fine view of the stadium was right outside my window.
I'm really glad I made the trip, and got to see the Giants win on the road for the first time since seeing them in Indy...in 1990. It was also good to see the gang from last year (and note to self: start eyeing the 2016 matchups). I also should mention the very friendly crowd. Despite the very large number of Giants fans who once again made the trip to Florida for a November game, it was a passive crowd. A bitter taste in my mouth remains from a Yankees at Rays game in 2010, but there was nothing resembling that here. Also noteworthy is George Steinbrenner field right across the street from the Stadium. Surely I'll be back for a Baby Yankees' game...

And, for good measure, here is my updated stadium chart: