December 03, 2014
And here I am at EverBank Park! Or, from all appearances, Giants Stadium South...

So, did you see what I did with that last sentence of my preceding post? Yeah, HKHWR is up to his old tricks again: Whereas my trip to the Linc last week was rather spontaneous, this football weekend became a given once the NFL schedule was released in May. A few of my friends have been waiting for Big Blue to play in Jacksonville these last few seasons. We figured to have a decent-sized group get together, but we ended up with 50 of us booking flights, arranging long and short road trips, reserving hotel stays, securing tickets, planning tailgates etc. So, I'm at my first Giants road game since 1998!

Not keen on planning football trips during ski season, when games may be flexed (ha--like that was a possibility for this matchup), or booking flights during Thanksgiving weekend, the schedule makers did us no favors. But none of that mattered when this weekend finally rolled around.

So, I left a snow-covered chilly Hudson Valley in the wee hours of Saturday morning, pulling out of my driveway at 4:30 am and 12 degrees. Then, it was just below freezing when I arrived in JFK, and up to 50 when I landed in Jacksonville.

While waiting for friends to arrive, I decided to wander around the riverfront near the hotel. I worked my way across St. John's River and over to the River City Brewing Company, where I had lunch and tried some of their beers. I thought it interesting that this place shared a name with the brewery I enjoyed in Wichita, though there was no connection to them.


Back at my hotel, friends started arriving. All of us too wiped out for a meet-and-greet that had been planned that evening a fair distance from where we were, we just stayed local. While that meet-up would have been fun, the new plans allowed me to catch up with a friend and her family, not to mention for us to enjoy a boat parade and rather impressive fireworks show, which we took in from the 19th-floor rooftop pool.

The next morning, I took another walk along the riverfront. I headed over the drawbridge again, to get get a few shots of downtown. I was soon chased off the drawbridge so that it could rise and allow a sailboat to pass underneath. I explained to the bridge operators that I would have gladly taken the ride straight up, but to no avail. Oh well. It was time to gas up the phone and take the walk over to the stadium for pregame festivities anyway.


Yeah, you're not going to get 50 people together in sunny Florida for a football game and not plan a tailgate. Well we had one! The funny thing was, we weren't the only ones with a Giants-themed gathering. There really seemed to be double or triple the number of Giants fans to Jaguars fans. We were a friendly crowd, and enjoyed good food--pulled pork, southern-style mashed potatoes, beverages, and a New York Giants sheet cake. Sweet!


Then, there was only the game left. We headed over and found our seats. I found a nice local pale ale, so I was set.

Big Blue scored first. And second. And third. It was 21-0 near the end of the half. We looked good. We let up a late first-half field goal but still seemed very much in control.

At half time I met up with another friend who transplanted from the Hudson Valley to Florida, before we all settled in for half number two. We had this one, right?

Well, a fumble was returned for a defensive TD. Ok, fine, they got one, but their offense still hadn't scored one on us, right? Bam! Right down the field they went and scored on a deep TD pass. Suddenly, our offense was stymied as their defense came to life. Another fumble was returned for a defensive TD and suddenly we were behind. What on earth was happening? There were so few Jaguar fans around now, but that didn't matter, as my fellow Giants fans and I just looked around lost. We pulled ahead one more time, but promptly lost that lead, and then lost the ball on the next poseession to seal the ignominy of that second half collapse. Big Blue lost 25-24. 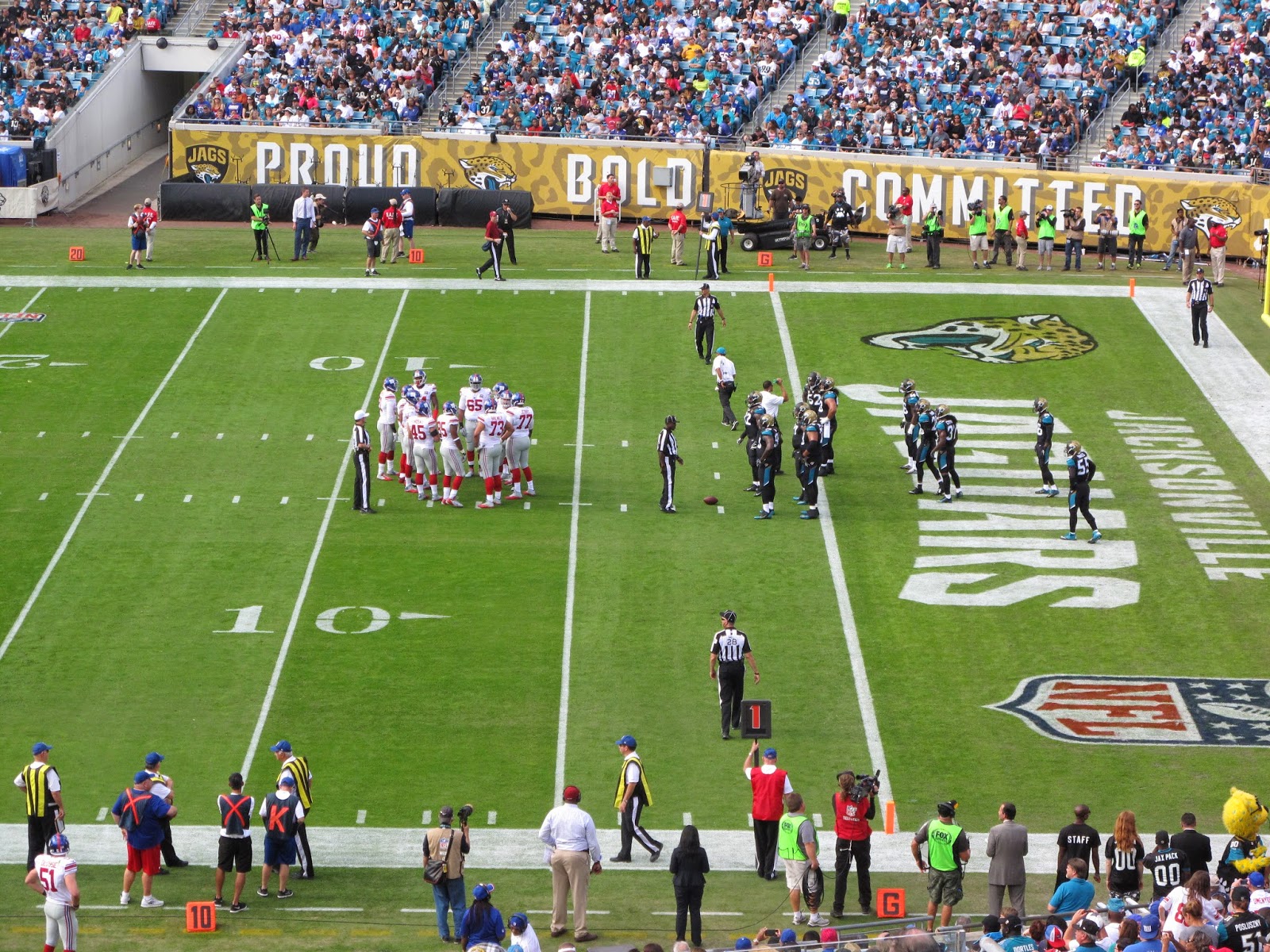 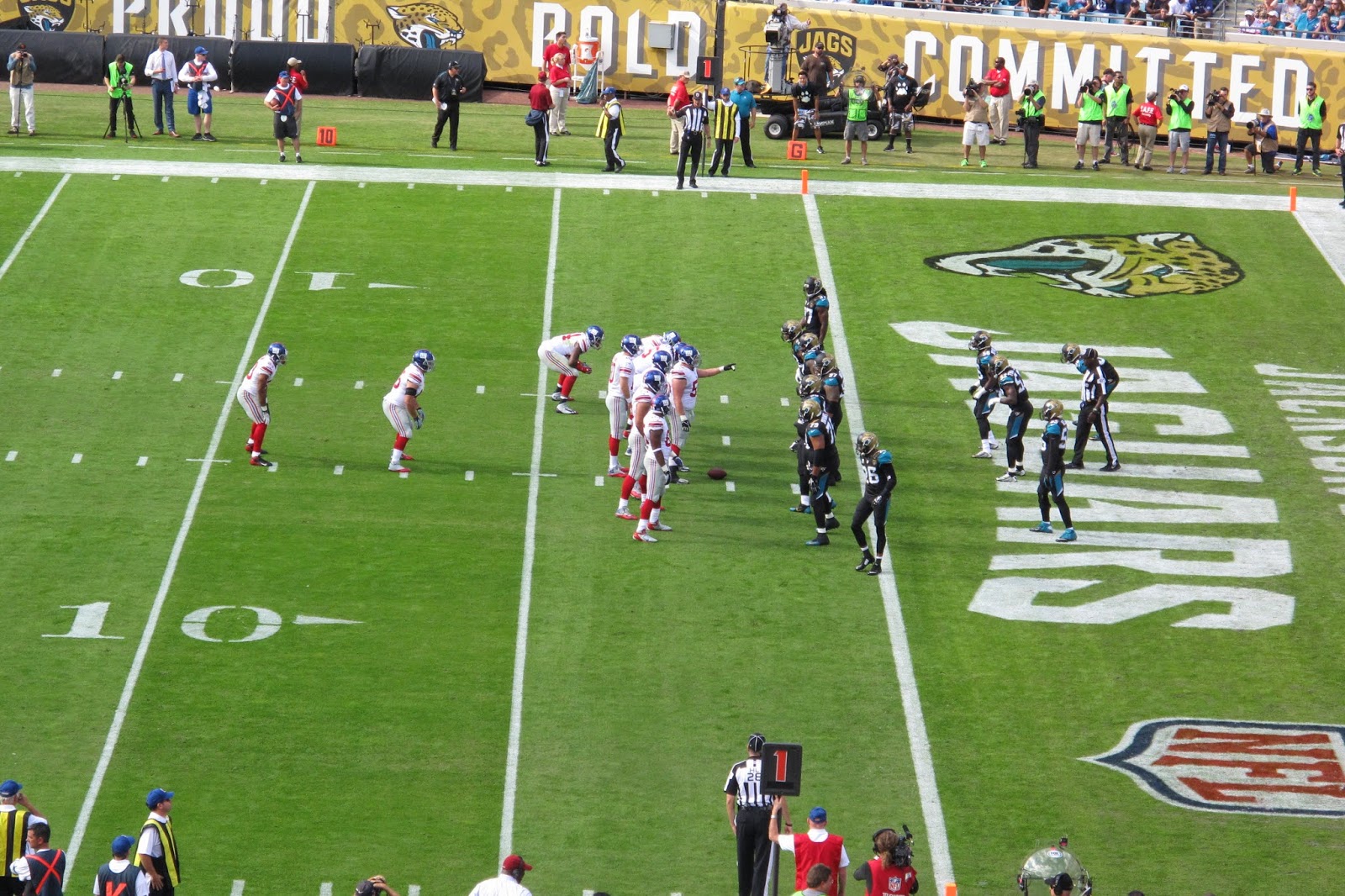 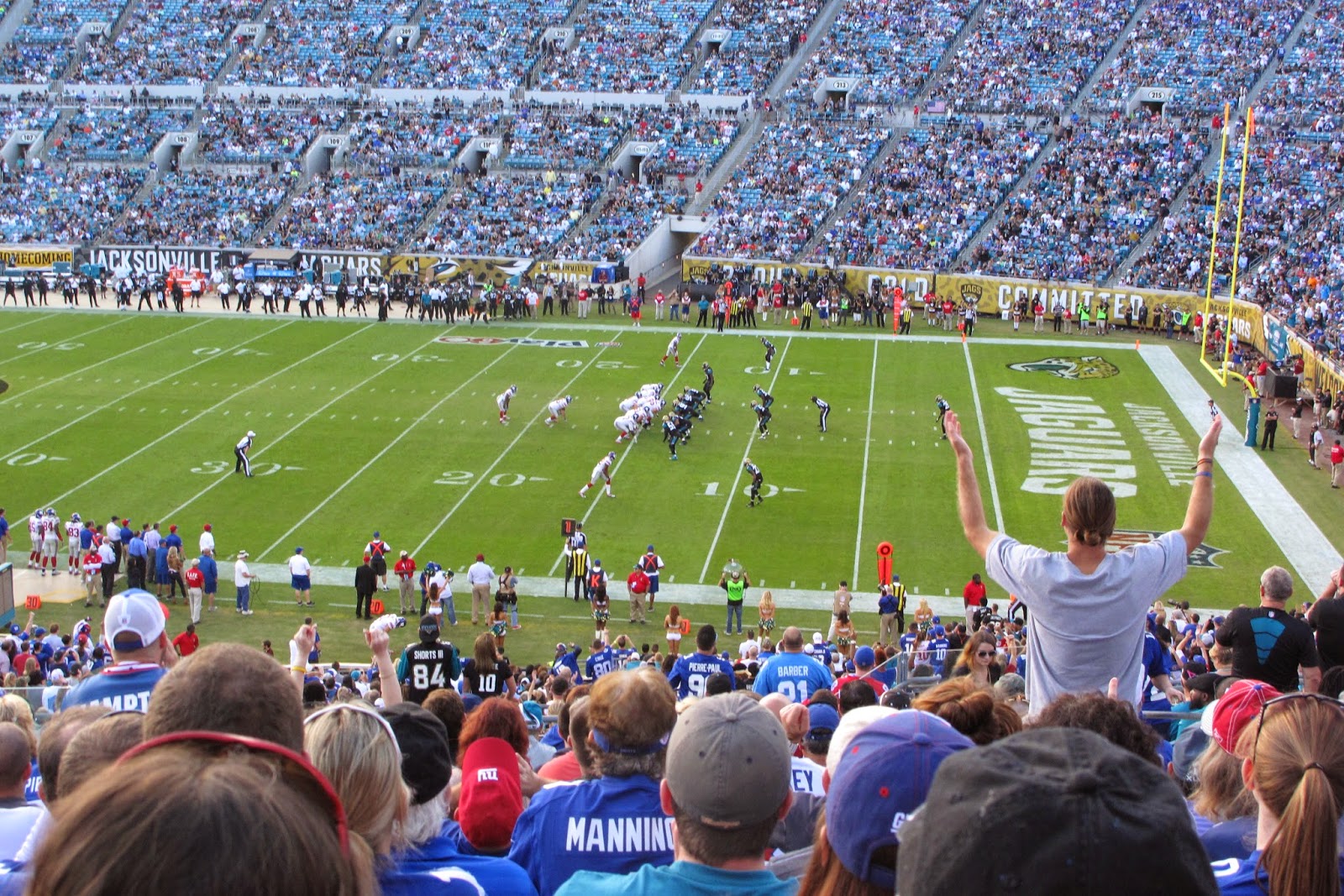 As far as Giants games I've attended, this one was more defeating than the one I saw when we were thoroughly trounced by Washington in 2011 (though we rolled after and won the Super Bowl seven weeks later), but I suppose not nearly as bad as the playoff game comeback the Vikings handed us in 1997. HKHWR has a decently long memory.
Yeah, a few of us may have been better off if we had a chance to cool off in this in-stadium pool...

Still, my voice and spirits may have been worn out by this game, but this weekend was a lot of fun. I got to catch up with some friends, make some new ones, and spend some time with like-minded fans. All good there. I look forward to doing it again. Sure, a win next time would be preferable, but I'll be happy to simply further bond with this group.

Incidentally, HKHWR, you're not the only one with mad trip-planning schemes; remember to raise your beer glass next Sunday as some of your new Big Blue buddies venture to Nashville to root on the GMen.

Oh, I can't end this post without my tallies. I have now seen what to me is a mind-boggling 27 of the 32 teams play at home. Those five teams are the 49ers, Cowboys, Texans, Lions and Buccaneers.

And how do you like that...the Giants will be playing in Tampa Bay next season, a fact to which this group was hip and alerted me. Hmmmm.
football stadiums travel