November 26, 2014
And here I am at the Linc! Yes, HKHWR has ventured into enemy territory.

When looking at possible road trips earlier this year, I did notice this game. I kind of wanted to get it off my to-do list, but wasn't really eager to stand among 10s of 1000s of Eagles fans. They did, after all, boo Santa Claus. But, as this season wore on, I did take note of things like the compassionate crowd response following the Victor Cruz injury (not to mention Head Coach Chip Kelly visiting the injured player in the hospital), and I remembered my own very pleasant experience while at a Phillies game a few years ago. I figured I could wear my team-neutral gear, and just quietly enjoy a nonconference game. I went back and forth about going a few times during the week and finally decided to go the evening before, rather than look at my growing list of visited stadiums and lament not hitting one three hours away. Plus they have cheesesteaks.

So, after spending the first part of the weekend with my dad, I drove over to a nearby SEPTA station, bought a $12 Independence pass, which was good for all trains all day, and took the two trains down to the Linc. And let me say $12 is a bargain, especially when compared to the cost of getting to MetLife from MetroNorth. A few Eagles fans were at the station, and I started talking to one of them, and then rode all the way down with him. A friendly guy, it was good to talk football, mutual dislike of the Cowboys and all that. Ok, Eagles fans can be cool. That was good.

After getting off the train, it was a short walk through all of the Philly sports complexes. It's a pretty impressive sight, with the Linc, Citizens Bank Park and the Wells Fargo and Spectrum arenas all together. I wanted to take pictures but the sun was too low and seemed right in the path of wherever I wanted to shoot.

Once inside, I circled the stadium looking for craft beer options. I didn't see any, which was just as well. But, I did get my Tony Luke's cheesesteak! Yummy. 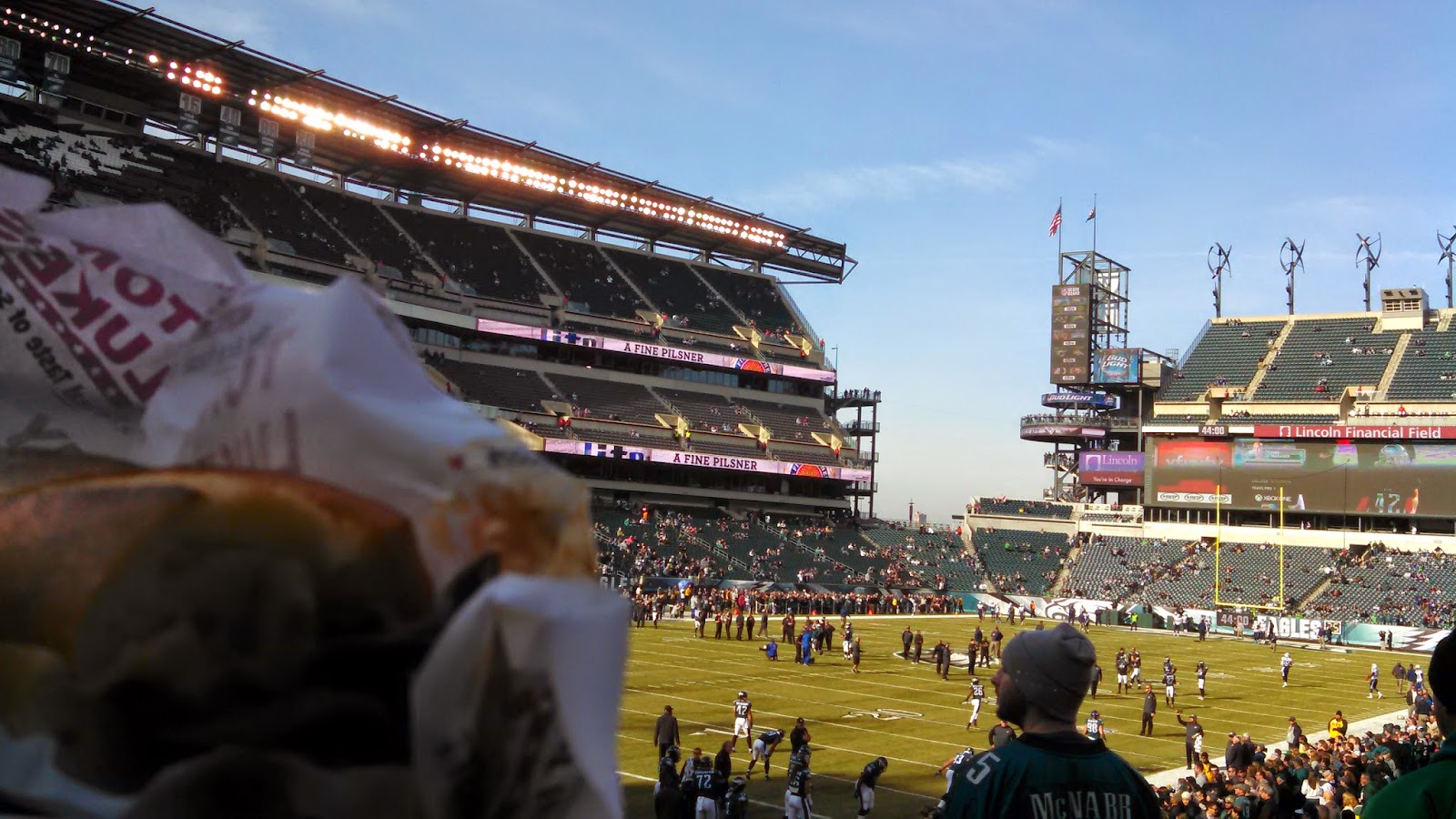 The temperature was in the 40s and it was sunny. Great football weather. My seat however was in the shade for the whole game--no biggie, but sitting in the sun-drenched seats would have been more pleasant. See? The cheerleaders look comfortable in the sun... 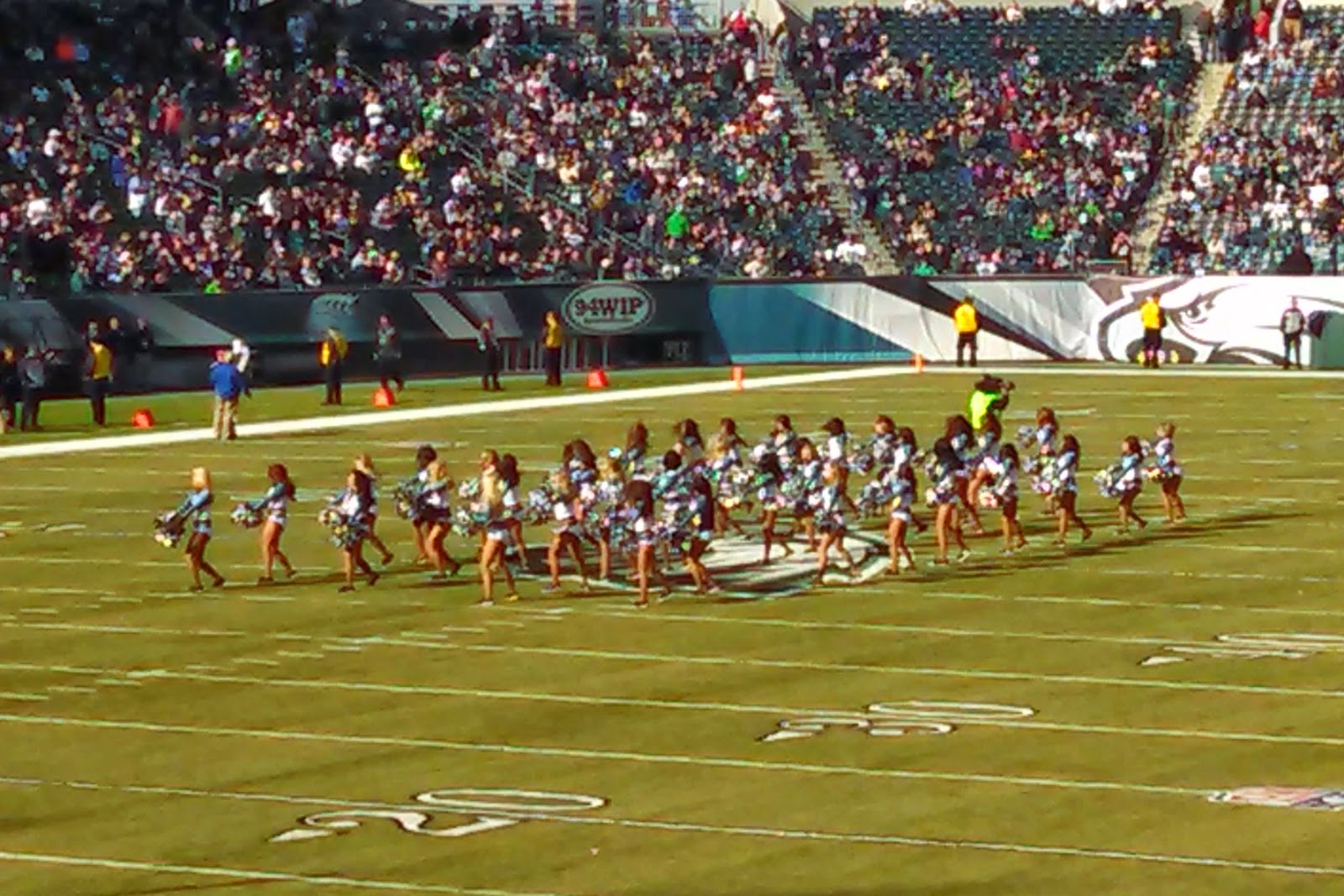 Then, like I always do, I got my phone ready to get the opening pitch or kickoff. What happened next was a first for me. The Eagles returned it for a TD. Just like that it was 7-0. And so I got to hear the Eagles fight song. 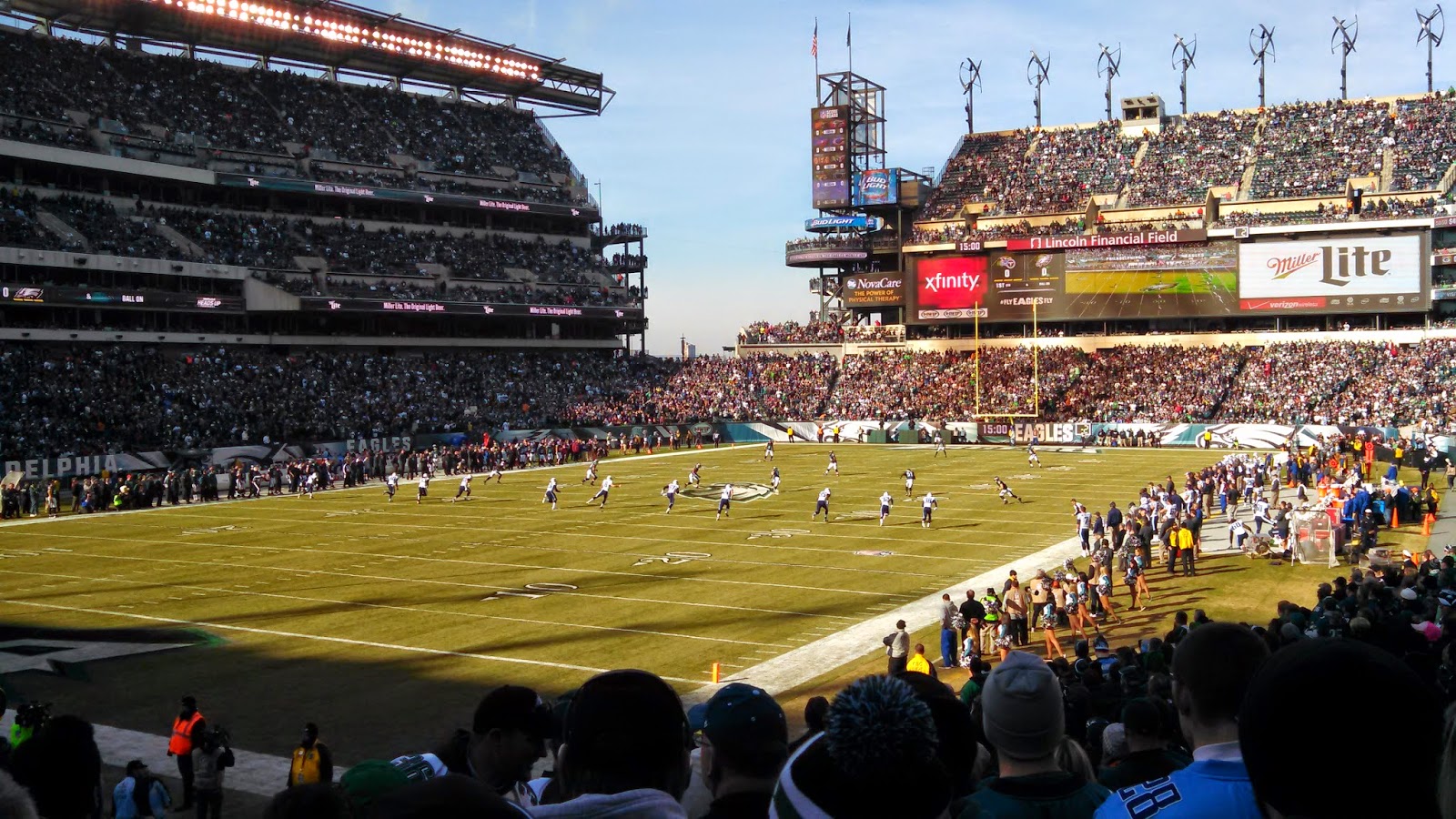 It really is quite the spectacle, with the music blaring over the PA system, the cheerleaders trying to dance to it and the crowd emphatically singing along. I heard it an awful lot that game, as the Eagles effectively had their way with the Titans, ultimately winning 43-24.

For a short time I was stuck sitting next to somebody that was really too large for the seat and who spilled over into mine. There was nothing he could do about it but I was squeezed into half of mine. Thankfully, the five seats behind me were empty, so I climbed back to those. I don't think I would have lasted long had I been stuck in my original seat.

My first football game of the year, this was a pleasant enough experience. More importantly, knocking this stadium off the to-do list leaves me with 26 teams seen at home, with Jacksonville, Tampa Bay, Houston, Dallas, San Francisco and Detroit left to see.

Getting back to the crowd, sure, there were some Titans fans in attendance, although most near me seem to have attended the game with their Eagles fans friends. Either way, I saw nothing at all that would make me think Philly fans are different from any others. Then again, I was wearing neutral gear and this was a nonconference game in which things pretty much went the Eagles way.

Would I attend a Giants game here? Hmmm. Come to think about it, it has been a while since I attended a Giants road game...