It should be a good one, as Peyton and company go against the Chargers at my first ever Thursday Night Football game. Unfortunately, Wes Welker, one of Manning's key weapons, is out, which means any op to tie Brady's single-season TD record tonight is less likely.

I flew out of NY this morning, met a colleague for lunch, and now am joining a retired former co-worker for the game. 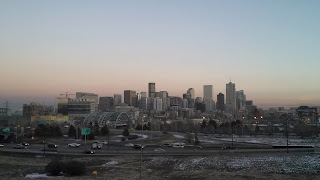 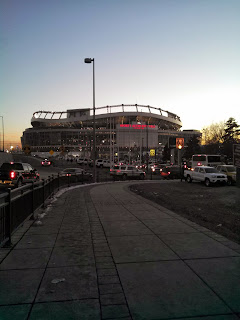 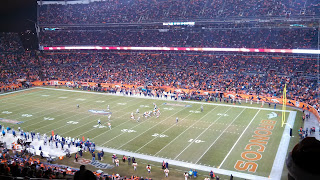 This is my first new NFL venue of the year, and finishes off the AFC West for me. After this game I will have seven teams left to see. I focused on finishing off the baseball stadiums this year, so didn't make a lot of progress with football. I hope to pick up the pace next year, which should be easier, as I only have to see one team west of the Rockies (the Niners), and just three west of the Mississippi River. And speaking of west of the Mississippi, this trip preserves a streak of at least one annual trip west of the river that started back on 1991.

I typically avoid December road games because of the potential for flexing schedules and especially bad weather. But, I could only do this trip at this time of year to manage its dual purpose: I head to Breckenridge tomorrow, finally skiing in Colorado for the first time, and skiing outside of the northeast for the first time since 2001.

I knew I would have ski clothes with me, so wasn't too concerned about cold weather at this game, but it is considerably milder than expected. Of course, it isn't T-shirt weather either, yet I have my trusty team-neutral NFL shield shirt on. It's under several layers, though. I will certainly root for the home crowd, especially after what the Bolts did to Peyton's brother a few days ago.

I had to get up at 4:30 to make the flight to Denver. Thankfully, I slept a bit on the plane. With the time change, the game should end around 9:30, and I should be back at the hotel by 10-10:30 or so. That works out well, as I need to get up early again tomorrow, to catch the shuttle to Breckenridge!

Time to watch the game!

And thanks to Tim for leading me to the BBQ and craft beer stand! Great to see you.
stadiums travel
Location: Sports Authority Field at Mile High, 1701 Bryant Street, Denver