The quest to touch them all is officially renewed this season. I left off last season with three teams to see and four other new ballparks to hit. The goal this year is to complete the first part, and chip away at the second.

This is my first time to H-Town, Space City, Magnolia City, or whatever the locals call it. This will be a very brief trip, as I arrived this morning, made the prerequisite brewery stop (and there's an awesome one here in the St. Arnold Brewery, where seven smackers gets you four 8-oz samples and a souvenir glass), and then leave tomorrow morning. There are, though, a number of things, and people, I'd like to see here. Perhaps I'll leave more time when I eventually make my way back for a Texans game. I note, in fact, that one of the first things I checked when the schedule was released was whether or not I could get to both teams in a single weekend, but the schedule gods did not comply. What I didn't double check was the game time, waking up ridiculously early to drive to the airport and catch what I initially thought was a day game. Regardless, yup, just a brief stop this time in what I believe is the largest city in the country in which I had not previously stepped foot will have to do.

I'm spending the night across the street at the Inn at the Ballpark, worthy of a quick TripAdvisor review, but suffice it to say here that this place should be an easy choice for those of us who venture from one ballpark to another.

This is a nice looking park from the outside, sits beautifully in downtown Houston, and I'm looking forward to the game.

I've got the team neutral baseball attire on, and will root for the home team, despite no real allegiance to either club. As I look around from inside the ballpark, I have to say the Astros did well. I understand I'm lucky to catch a full game with the roof open. I'll say I'm lucky if the home team can make the train start moving.  Ticket prices are a fraction of what they cost in NY. Still, the stadium is half empty, and half of those here seem to be Cards fans. And Joe Neutral me...

Anyway, time to stop with the necessary checkins and editing this post (full disclosure: these ballpark and stadium posts are somewhat templated beforehand via Evernote and mostly finalized before the game starts...), and enjoy the ballpark and game! 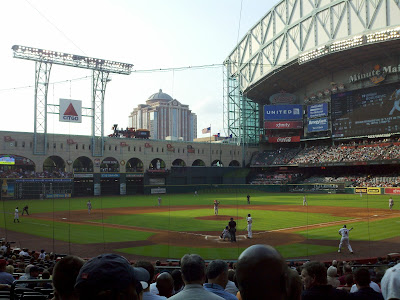